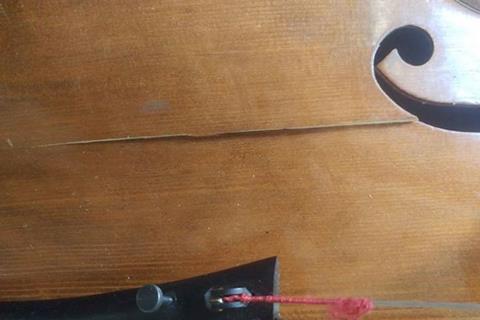 Opening his case after the flight, Schinke found three large fractures to his cello

A cellist has suffered damage to his instrument after a flight from Porto Alegre to Paris operated by Azul Airlines and Aigle Azur Airlines.

Pablo Schinke, a Brazilian cello teacher who lives in Paris and is a member of the chamber group Trio in Uno, had checked in his cello as fragile baggage in a carbon flight case when he boarded the flight on 27th August. ‘I was used to flying this way and never previously had any problems, knowing the cello was protected in the best possible way,’ he says.

But when he opened the case after the flight, he found three large fractures to his cello.

‘The luthier estimated the repairing costs in €3876’ says Schinke. ‘Azul Airlines denied handling the case claiming lack of an irregularity register number, even if I have the legal right to make a report until 7 days after the arrival; same answer by Aigle Azur on the phone. I went to the Aigle Azur office and they said I should contact them by email, but the address they gave me does not exist. At the baggage service in the Airport I was informed that the only procedure would be to send the company a registered letter explaining the situation, which I did, but I still have no answer.’

He concludes: ‘All I ask is that the company helps me to pay the costs for fixing my cello so I can get back to work with it again, hoping that one day flight companies will treat musicians and our instruments with more respect.’