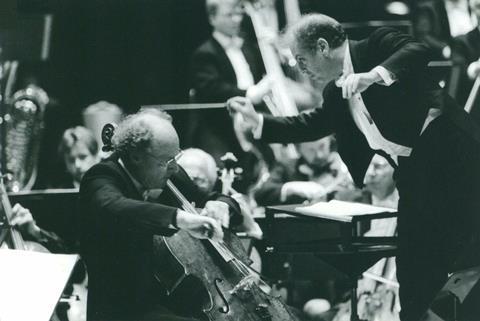 Ottomar Borwitzky with the Berlin Philharmonic and conductor Daniel Barenboim

Borwitzky joined the orchestra on the same day Herbert von Karajan’s position as its principal conductor was made permanent and retired in 1993, four years into the tenure of Claudio Abbado. Borwitzky was a founding member of the 12 Cellists of the Berlin Philharmonic and joined the orchestra’s Karajan Academy in 1979.

Borwitzky’s death comes only a month after that of Wolfgang Boettcher, principal cellist of the Berlin Philharmonic between 1963 and 1976.

In a statement, current Berlin Philharmonic cellist Knut Weber said: ‘Ottomar Borwitzky was a musical personality of extraordinary charisma. He played with an intensity that gave expression to even the briefest musical phrase. His sound was flawless, yet always lively. Through his skill, musicality and incomparable charisma, he was an inspiration to the orchestra’s cello section for decades. In a personal capacity, he was gracious, humorous and always willing to share his immense knowledge with others. With Ottomar Borwitzky we lose a key musician of the Karajan era. We will not forget him.”