Twelve violinists will proceed to the competition’s second round 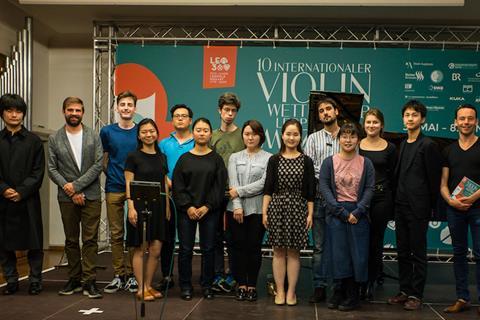 The twelve semi-finalists of the Leopold Mozart Violin Competition

The 10th international Leopold Mozart Violin Competition, held in Augsburg, Bavaria, has announced the competitors proceeding to the second round, which starts today.

In addition, the €1500 prize for the best interpretation of the commissioned work - Soleos by Elżbieta Sikora -  has been awarded to the Spanish violinist Julen Zelaia.

Founded in 1987, the triennial competition is named for Wolfgang Amadeus Mozart’s father, Leopold, who was born in Augsburg and who was an invaluable teacher to his famous son. The year Wolfgang Amadeus was born, Leopold Mozart launched his important Violin School in Augsburg - a school that, thanks to historical performance practice, has experienced a renaissance in recent years.