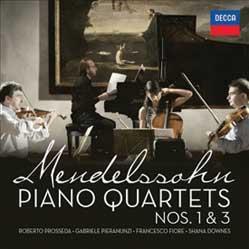 Marie Macleod and MartinuSturfält’s partnership had reached its sixth anniversary when these live performances were recorded. Their compelling accounts, expertly captured in 2009, reveal little evidence of an audience presence, but have all the spontaneity of the concert platform. They tackle Mendelssohn’s two sonatas with a winning unanimity, vivacity and youthful spirit. They convey the lyricism and contrasting moods of the outer movements of no.1 with deft musicianship and characterise the intermezzo-like central Andante with piquancy and finesse, giving due expression to its major-mode kernel. They also give an exhilarating reading of the heroic first movement and energetic finale of no.2. Sturfält’s digital dexterity easily surmounts Mendelssohn’s pianistic challenges and Macleod, sometimes matching him in athleticism, plays with an impassioned lyricism, particularly in the Second Sonata’s recitative-like Adagio and its mischievous intermezzo’s central section.

Both artists dispatch the Variations concertantes with enviable rapport, imagination and panache, right from the simple opening through the fiery fourth and dance-like fifth to the agitated seventh and the extended final variation. They introduce countless musical subtleties en route, highlighting harmonic interest, shaping phrases sensitively and exploiting a wide expressive palette. The Lied ohne Worte op.109 and the Assai tranquillo fragment showcase Macleod’s colourful sound at its most radiant.