The Strad’s 2021 calendar celebrates the work of Dextra Musica, founded in 2006 by Norway’s DNB Savings Bank Foundation to manage its new collection of stringed instruments. Fifteen years later, the collection has grown into one of the world’s most comprehensive and definitive holdings of fine instruments, both old and new. This year’s calendar contains instruments by Stradivari, Guarneri ‘del Gesù’, Guadagnini, Gasparo da Salò, Nicolas Lupot, Carlo Bergonzi, G.B. Rogeri, the Grancinos, and Jean-Baptiste Vuillaume. There are violins, cellos, violas and one double bass.

All the instruments in the collection are on loan to musicians. In return for borrowing an instrument, each player devotes five days annually to inspiring young students, and playing at public events and concerts. An outreach programme set up by the foundation reaches all ages and levels of musical skill, with the mission of enhancing the Norwegian classical music scene.

Luigi Arditi (1822–1903), the violinist after whom this 1689 Stradivari is named, relates the story of the violin in his Reminiscences, published in 1896. It was at first loaned to him by Carlo Carli of Milan, whom Count Cozio di Salabue had also noted as the owner in 1816 (although Cozio gives the date of the violin as 1684). It was later purchased from Carli on his behalf by the Duke de Litta, for him to use in his examination performances at the Milan Conservatoire in 1846. Arditi later settled in London, and he sold the violin to W.E. Hill & Sons in 1895. While in Ardtiti’s possession it was played and admired by a virtual roll call of the most distinguished performers of the period, including Sainton, Sivori, Ole Bull, Wieniawski, Wilhelmj, Vieuxtemps, Sarasate and Joachim. It remained in England throughout the 20th century in the hands of various collectors, until passing to Howard Gottlieb of Chicago, and from him to Dextra Musica in 2007.

It is an important violin, of large model, built on the ‘PG’ form and just predating the more extreme Long Pattern instruments Stradivari introduced in the 1690s. What is particularly interesting is the AS monogram inlaid into the back button, which is found in only one other extant Stradivari, the tenor viola of the 1690 ‘Tuscan, Medici’ set, where it is marked on the face of the pegbox mortise. It is this that raises the possibility that the ‘Arditi’ was originally made for this set; one of the original violins seems to have been lost quite soon after completion, and Stradivari made a replacement for it in 1716. The ‘Arditi’ might possibly be the missing Medici violin. 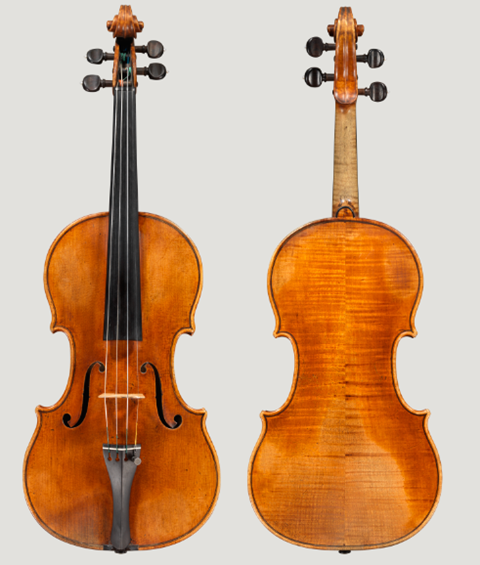