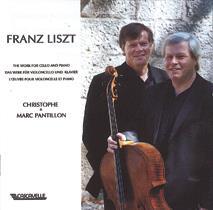 There are few works in the cello repertoire that plumb the depths of profound despair as far as Liszt’s La lugubre gondola. This work demands tremendous control of phrase, not least in the final bars, where the music becomes increasingly fragmentary. By adopting a brisk tempo throughout, Swiss cellist Christophe Pantillon generates a convincing continuity of line while allowing the searingly intense and haunting melody to move inexorably forward.

For the rest of the disc the Pantillon brothers have chosen a number of unusual transcriptions, including the well-known Consolations in which the third’s Chopinesque decorative melodic ideas are elegantly projected. Elsewhere, both cellist and pianist eschew over-flamboyant delivery, instead steering an intimate path through the searching elements of mysticism. There are some moments, however, when this approach could benefit from more colours and greater flexibility in the phrasing, a prime example being the slightly monochrome timbres effected in Die Zelle in Nonnenwerth. Alongside the exquisitely enigmatic elegies are some real finds, for example Busoni’s vivid arrangement of the First Valse oubliée, which offers a strikingly compelling contrast to some of the more plaintively melancholic items.