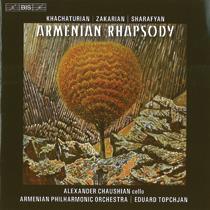 Alexander Chaushian is on sparkling form in this highly enterprising and beautifully recorded CD. The rarely heard Concerto–Rhapsody by Khachaturian is performed with tremendous conviction, but although this technical tour de force, originally written for Rostropovich, boasts some vintage melodic moments, the score is rather empty, with too much note-spinning. The darker hues of the Monograph for cello and orchestra by Suren Zakarian are far more convincing musically and receive an intensely imaginative performance from Chaushian. Inspired by the concept of the soul in conflict, the work deploys the cello in a high register with shimmering gentle clusters in the orchestral accompaniment. The emotional fervour increases with the cello incanting urgently before ebbing away in a lighter vein.

A similar use of harmonic clusters colours Vache Sharafyan’s Suite. This stunning work, encompassing ingenious allusions to the harmonic patterns and dance forms of the Baroque, travels through a kaleidoscope of iridescent timbres.  Chaushian is again totally immersed in the vernacular and gives a searingly eloquent rendition. Equally enthralling is Sharafyan’s arrangement of Komitas’s folk piece Krunk (Crane) for duduk, piano and cello. As in the Suite, tonally conventional elements co-exist with the oscillating pitches and clusters of Sharafyan’s harmonic language to magical effect.