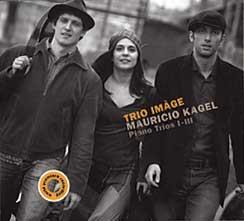 On the surface, Mauricio Kagel’s three piano trios sound traditional enough, with fairly conventional melodies, often tonal harmonies and precious few moments of avant-garde weirdness. But look further and they’re deeply strange works: nothing fits together, melodies spin on and on but get nowhere, and textures seem ready to fall apart entirely.

It’s a strangeness that the German-based Imàge Trio captures to a tee in these spellbinding performances, both beautifully judged and hugely committed. The threesome’s playing is superbly accomplished in technical terms, but also gloriously responsive to the music’s unusual demands: in the First Trio, for example, violinist Gergana Gergova answers some of Kagel’s more outlandish outbursts with a raw, extrovert sound, fading to a fragile purity elsewhere. Cellist Pavlin Nechev matches her astonishing versatility with sensitive, thoughtful playing.

The Third Trio is the most light-hearted, erupting into a kind of deranged salon music at one point, which the players deliver with sensual abandon. But it’s in the sinister, spectral world of the Second Trio that they shine the brightest, slowly transforming its tongue-in-cheek grotesqueries into something truly harrowing, and conveyed with blazing sincerity. With warm, generous recorded sound, it’s a disc of delights and enigmas, which will abundantly reward many careful listens.