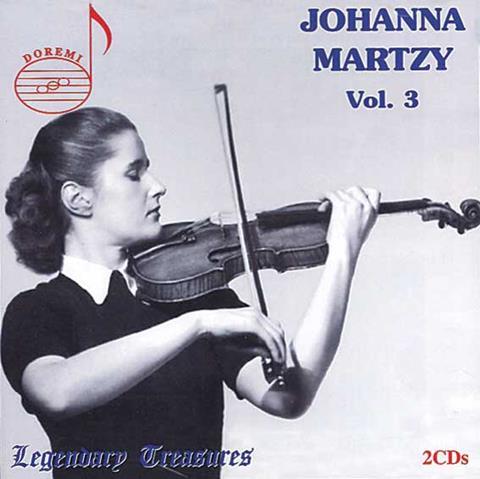 The life of Johanna Martzy (1924–79) ended in illness and disappointment, but she has posthumous fame, thanks to collectors of her recordings. This set adds works by Bach, Bartók, Brahms, Martinu¯, Vivaldi and Suk to her slim discography. Violin tone varies but everything is listenable.

Of two 1961 accounts of Mozart’s G major Concerto K216, I prefer that with Willem van Otterloo – a little brisker. Martzy’s playing has a refreshing springy quality, with fine tonal shading, and becomes positively bouncy in the finale. Bach’s E major is stodgily conducted by André Cluytens and in Bartók’s First Rhapsody, despite George Szell’s Hungarian credentials, Martzy’s accents are crisper than the orchestra’s. In a 1969 German Radio rendering of Suk’s Four Pieces with fellow Hungarian István Hajdu, the ‘Quasi ballata’ is pensive and passionate by turns, the ‘Appassionato’ has good rhythm with a lyrical central section, the ‘Un poco triste’ is deeply felt with capricious contrasting passages and the ‘Burleska’ is rhythmically alert.