The findings, published by classical events listing service Bachtrack, were drawn from the website's 2016 calendar of concerts worldwide 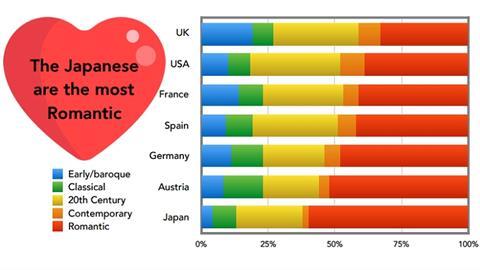 Classical events website Bachtrack has published its statistics for 2016, and has concluded that Japan is the world's most Romantic country.

The database listed 32,000 classical events around the world last year and found that 67 per cent of works performed in Japan came from the Romantic period. The website also determined that Japanese concerts were much more likely to take place in the afternoon - at 28 per cent of the whole - as opposed to just eight per cent being afternoon performances in Europe.

The world's busiest solo violinist listed on the site was Leonidas Kavakos, followed by Baiba Skride and Renaud Capuçon in joint second place, and James Ehnes at number four. Topping the cellists was István Várdai, followed by Gautier Capuçon at number two, Truls Mørk at number three and Sol Gabetta at number four.