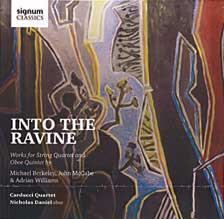 The Carducci Quartet’s first release on Signum Classics brings first recordings of three British works, all of which the group has premiered at the Presteigne Festival in Wales.

Michael Berkeley’s finely wrought Oboe Quartet (2012) – a single movement spanning 18 minutes – is texturally transparent and plangent in expression. It’s also neatly written in creating climaxes that are not reliant upon loud dynamics that might mask the oboe. Its title, ‘Into the Ravine’, suggested by a painting by John Craxton, is apt: its haunting, almost Expressionistic atmosphere is well captured by the Carducci, and oboist Nicholas Daniel plays with remarkable poise, too.

The Carducci players get more of a chance to show their teeth in John McCabe’s five-movement String Quartet no.7 (2012), particularly in its ‘wild and fast’ perpetuum mobile central panel. But the ferocity is never ugly or edgy.

The earliest piece on the disc is Adrian Williams’s String Quartet no.4 from 2009, which showcases the Carducci’s fine ensemble playing, not least in the Brittenesque lyrical unisons of its first movement and the warm, spacious modal harmonies of its slow movement – a kind of modernised Vaughan Williams meets Middle-earth.

Just occasionally the reverberation behind the quartet becomes too audible, but otherwise the recording is exceptionally warm, clear and well balanced. This is a fine disc of new British music, and the beauty of the Carducci’s playing will surely prompt repeated listening.