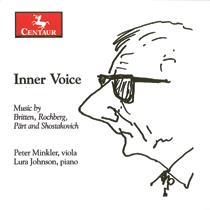 This lovingly recorded CD presents a well-planned recital of central viola repertoire from the mid- to late 20th century. Britten’s Lachrymae, the oldest piece here, is given an unusually well-structured performance that goes beyond superficial tonal beauties to reveal the score’s constitutive elements. While listening I felt that this is how William Primrose – the piece’s dedicatee – might have played it, so it was interesting to read that Peter Minkler mentions Primrose as an enduring influence on his musicianship.

George Rochberg’s Sonata has also a Primrose connection, having been commissioned for the great man’s 75th birthday. Still too little known in Europe, this is an important repertoire piece by a repentant serialist who went back to melody and tonality with a vengeance. The sonata’s slow movement plumbs great emotional depths that are uncompromisingly conveyed by both musicians. After this, Arvo Pärt’s ‘tintinnabulations’ (the composer’s own description of his style after he too turned away from serialism) in the piece spiegel im spiegel are a welcome interlude before Shostakovich’s Sonata. This receives a restrained performance that lets the music speak its nihilistic message without rubbing it in with superimposed emotional antics. Minkler and pianist Lura Johnson make a marvellous team, and this beautiful recital is further enhanced by the violist’s enthusiastic booklet notes.