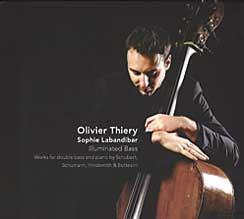 With the original arpeggione safely out of the way, the sonata Schubert wrote for it is fair game for other instrumentalists, as long as it works. Olivier Thiery quickly establishes that the double bass, in his hands, can sing Schubert’s melodies, and in the more agile sections of the first movement he sounds more secure than some cellists I’ve heard (the tempo is on the broad side, more moderato than allegro). He mostly plays an octave below the original pitch, which sometimes puts him under the official bass-line, but the uniquely thrilling sound of the instrument in profundis is a joy: no cello, or arpeggione, could match the grandeur of the bottom E string at the end of the Adagio. The instrument, however, has a presiding melancholy that colours Schubert’s jauntiness in the finale.

In the second of Schumann’s Three Romances (originally for oboe) there is soulful playing, and there are colourful shifts of mood and character in the third. Pianist Sophie Labandibar, commendably careful not to overpower Thiery in these works, is let loose in the vigorous dialogues of Hindemith’s Sonata.

The Bottesini has beautifully shaped melodies to balance the pyrotechnics before Michel’s pizzicato Myrna, short and genial, ends the CD. The recording is close and warm with excellent balance.