How the harmonic series can unleash your tonal energy

Work on the harmonic series and you'll release a wealth of colour from your instrument without effort. Pedro de Alcantara explains how it's done 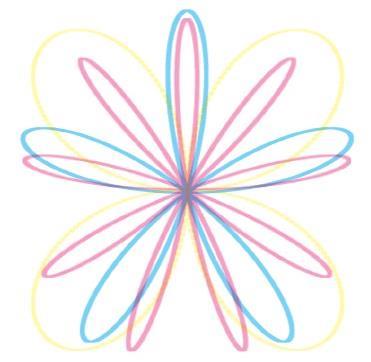 This article was first published in The Strad's January 2005 issue.

Summertime, and you’re sitting in a swinging porch bench, moving gently back and forth with the smallest effort of your legs. A breeze blows across your face, and you feel contented and fulfilled, in sync with life’s very rhythms. Wouldn’t it be nice if producing big, beautiful sounds on the violin were just as easy?

A force of nature exists that allows you this ease at the instrument – as long as you’re at one with it. It’s the acoustic phenomenon called the harmonic series. It’s an oscillatory phenomenon similar to the swinging of a pendulum or the waves a stone makes when thrown into water. Pluck the string or drop the stone and the energy is released without any further effort. As with a pendulum, poise is more efficient than brawn in setting off the mechanism. Time your playing skilfully – as you do when you swing that porch bench – and you’ll have tremendous tonal energy at your disposal, without effort or strain. But first your ear must discover the phenomenon.

Sit at a well-tuned piano with the lid open. Without sounding it, press the C below middle C with your right index finger and hold it down. Now play the C below it (the equivalent of the cello’s open string) with the left index finger, with a short, loud, accented articulation (see example 1). As the note dies down you’ll hear the C immediately above it ring out, almost like an echo.

It may sound for several seconds, depending on the piano and the acoustics of the room. Try the other partials, each in turn, then several in combination. They’ll appear like an eerie, soft choir heard in the distance. Holding down a cluster of notes with your right hand, strike and release two adjacent notes a couple of octaves below the cluster (C and C sharp, for example). You’ll hear a variety of consonances and dissonances as the heavenly choir grows in complexity and subtlety.

Play the low C again, on its own this time, striking it with any number of articulations – soft or hard, sustained or short. Having awakened your ear, you should now perceive at least some of the upper partials that make up that one note. The partials are always present; hearing them takes some training, but in time you’ll detect their presence in many musical situations – and in non-musical ones, such as the whirring of a fan or the rumbling of a refrigerator.

Most instruments are constructed around the harmonic series. On a bowed instrument, you can sound the natural harmonics of an open string by pressing lightly on precise spots, called nodes, along the string and bowing or plucking it. If you look at figure 1, the nodes represent the places along the string where it is not moving. You can also sound artificial harmonics by stopping any note down normally and pressing lightly a fourth or a fifth higher with another finger of the left hand, in each case creating a different harmonic. You can play the same pitch on different strings, using natural or artificial harmonics as appropriate, giving the instrument a tremendous colour range. 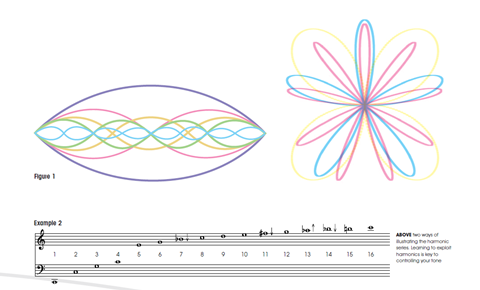 Modern composers have often exploited the harmonic series as a compositional tool – using the piano as described earlier, for instance. But the effect of the harmonic series can be noticed in compositions from much earlier. The sixth harmonic of any pitch is the major third above the fundamental, but two octaves higher. It’s clearly audible on the low notes of a cello or bassoon. When playing pieces in minor keys, this harmonic clashes harshly with the tonality’s inherent minor thirds. You can hear this by playing the chord in example 3 on a well-tuned grand piano. The E flat of the C minor chord clashes against the E, the fifth harmonic of the bass C.

The harmonic series provides a mathematical underpinning for tonal music’s vital interplay of consonance and dissonance. The frequency ratio of any two notes in the harmonic series is simply the ratio of their positions within their series. Consonances are based on the simple ratios – 2:1, 4:3, 5:2 and so on – whereas dissonances are based on more unwieldy ratios, like 11:7. The development of Western music, from plainchant to organum (two voices sounding fourths, fifths and octaves) to modal and tonal counterpoint and beyond, largely corresponds to a climb up the harmonic series, each evolution demonstrating the willingness of composers and audiences to accept the validity of ever more complex intervals.

We’re now ready to work on the harmonic series, using the cello’s strings and pitches for our exercises. If you’re a violinist, violist or bassist, transpose them as needed.

— Practise drawing slow bows near the bridge on open strings, executing crescendos and diminuendos anywhere along the bow. This basic stroke is essential for most of our exercises (see example 4).

— Find and execute each string’s natural harmonics, one at a time and in order, starting with the instrument’s lowest string. You can produce natural harmonics at either end of each string. For this exercise, play the ascending harmonics as they approach the bridge, not the nut. Find a comfortable left-hand position for each harmonic and play it without hesitation or timidity, varying the dynamics at will (see example 5). Memorise the series for each open string and, over time, for all pitches.

This is easier than it seems, as the sequence of intervals doesn’t change. Once you’ve grasped it you can derive it afresh for any note. The first six harmonics create a major chord that your ear recognises as a single entity, cutting down the amount of information you need to process.

— Play the lowest open string’s second harmonic (the octave) four times in a row, with a crescendo; follow it with a short, ringing open string. You’ll soon be able to perceive the harmonic as a component of the open string sound. Repeat the exercise with the first seven partials of each open string. Your ear will seize some partials more readily than others – the third harmonic (octave plus fifth), for instance, resonates brilliantly on most string instruments. The sixth harmonic (two octaves and a fifth) is given a helping hand as the unbowed section of the string, between the bridge and the tailpiece, is normally set up to be a sixth of the bowed string length, giving it a natural frequency of six times that of the open string and so enhancing the sixth harmonic. Soon you’ll become able to hear several partials simultaneously whenever you draw an open string, as in example 6.

— Play an open string with a short, ringing up bow; follow it immediately with the octave, played softly, not as a natural harmonic but as a stopped note on the next string up, with a focused down bow. The octave will blend with the resonating partials of the open string, creating a beautiful effect in which the octave and its fundamental complement each other. Do the same for other harmonics, playing them as stopped notes where they’re brightest, as in example 7. Vary the dynamics and speed of the exercise, alternating among several partials.

Create a simple improvisation using the first few partials of each open string. Connect the notes with an elastic legato and make sure that the change from note to note doesn’t hinder the resonance of the whole instrument.

Play the cello’s open D string and think of it as a second harmonic. The D an octave below, in first position on the C string, is its fundamental. Now play a version of the previous exercise (see example 8).

You can expand this and use the first few partials of any open string as trampolines for creating new fundamentals, adding low Es and Bs and Fs to your sound palette (see example 9).

Bring together pitches that are one of the following: open strings; second, third, fourth or fifth harmonics of an open string; either of the fundamentals for which an open string is a second harmonic (D and A). All these pitches – some belonging to the harmonic series of two or more open strings – resonate beautifully on string instruments. Play scales and improvisations around them, as in example 10 (the arabic numerals represent the partials, the roman indicate the strings).

Certain notes – D flat and E flat, for instance – aren’t supported by vibrant fundamentals. Take a few pitches from the previous exercise and improvise a short melody passing from supported pitches to these unsupported ones. Shaping the left hand and using variations in bow pressure and speed, find ways to adjust the resonance of these unsupported pitches. It’s as if some notes were natural children to open-string parents, others adopted. Your job is to tend to the adopted ones until they resemble the blood family. These unsupported notes are marked with circles in example 11.

ake any mainstream piece – Chopin’s Cello Sonata, Bach’s partitas or Hindemith’s Viola Concerto no.3 ˜Der Schwanendreher’. Notice how many pitches in any passage belong in each of these categories and how freely they resonate. Choose a phrase, add fermatas to the relevant pitches and execute your own meditations on the intimacy between fundamentals and harmonics. In time, the free resonances of the harmonic series will inform every note in every passage (see example 12).

These exercises have startling effects. If you synchronise your playing with the vibrations of the harmonics, you can produce a big, beautiful sound with great economy of means, mitigating or eliminating physical effort. Vibrant harmonics give the sound a penetrating quality that carries far from a concert stage, even in pianissimo dynamics. The instrument itself appears to improve and, indeed, you can easily produce the true vibrating qualities of your violin or cello if only you ˜let it ring’. The aural knowledge gained from exploiting the harmonic series enhances the execution of tonal music, as the player starts sensing the dominant-to-tonic relationship between the third harmonic and the fundamental, for example.

Above all, the simplest acts of music making become joyful expressions of a marvellous natural phenomenon: the release of energy through oscillatory patterns, set into powerful motion with virtually no effort. Bowing an open string becomes akin to receiving the ocean’s embrace and being endlessly anointed by warm, gentle waves. If that doesn’t make you want to practise, nothing will.