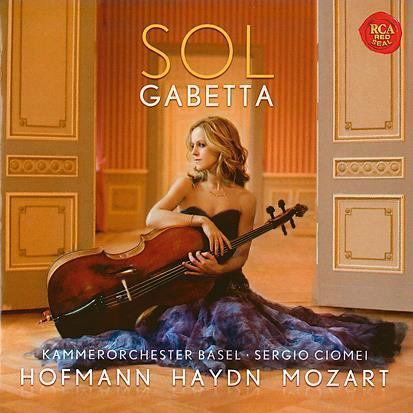 Leopold Hofmann can justly stand alongside his two illustrious contemporaries here. His interpreters are first-rate: the orchestra’s delicate ritornellos, Sol Gabetta’s pure tone and graceful good taste never straying outside the music’s expressive limits and the excellent recorded sound make this a disc to treasure.
Although his D major Concerto has striking similarities with Haydn’s contemporaneous C major work, Hofmann’s first movement is far gentler. Gabetta’s entry is simple, striking and entirely without vibrato. Her playing in the Adagio’s very high tessitura passages is exquisite and the bow work in the exuberant Allegro molto faultlessly neat.

A little more muscle comes into play in Haydn’s military first movement, and Gabetta chooses a metallic sound for its rapid bottom Gs. Her 1759 Guadagnini’s lovely upper registers come into their own in the Adagio, whose cadenza, Gabetta’s own, contains some striking expressive gestures and a rather charming false trill ending.
There’s always an ‘if only’ for cellists where Mozart is concerned. Georg Szell’s efforts to redress the balance have been enhanced by a second-movement arrangement by Sergio Ciomei, who directs from a slightly too audible piano. While we’re no closer to knowing what a Mozart cello concerto would have been like, Gabetta makes nimble work of these arrangements.