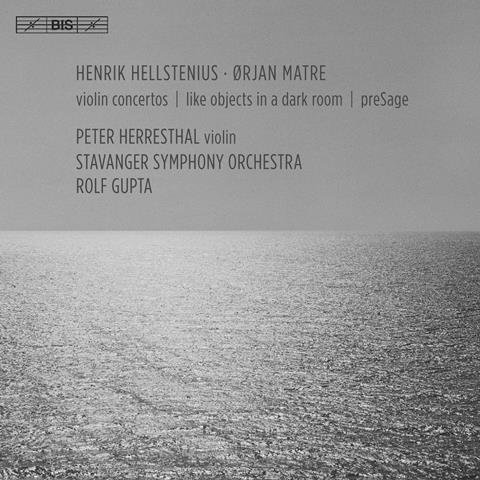 Commissioning a second violin concerto from Henrik Hellstenius, Peter Herresthal asked that the work be ‘more virtuosic’. Don’t expect any rhapsodising in Hellstenius’s piece, just scoring that calls for extremes of technique from the soloist. Ørjan Matre, meanwhile, chose to home in on specific aspects of Herresthal’s playing for his Violin Concerto, notably the violinist’s confidence at the top of the register and his sure way with harmonics.

Matre’s is the more ‘traditional’ concerto – sweet, as those techniques might suggest, but no less appealing for it. The violinist coaxes the orchestra in the first movement but is locked in a tense conflict with it in the second. Hellstenius’s piece, a reflection of his father’s descent into Alzheimer’s, is chillingly fragmentary. But it’s tautly worked out and most effective at its mourning and despairing climax. Herresthal’s sound isn’t big and it isn’t warm, but it’s clean and determined.

Like Objects in a Dark Room seems to me to become a straight orchestral piece rather than maintaining the idea of ‘a spatial sound sculpture’, as the composer claims it to be. Matre’s preSage is a canny refraction of The Rite of Spring that avoids in-jokes while channelling all that work’s savagery. When you roll in Stravinsky, there are a lot of personalities on this disc. I fear it might fall between one of those stools.