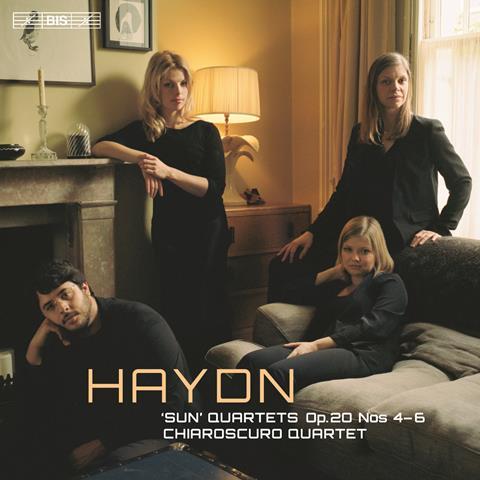 This much-anticipated follow-up to the Chiaroscuro’s infectiously spontaneous readings of the first three ‘Sun’ Quartets is like no other. ‘There is perhaps no single or sextuple opus in the history of instrumental music which has achieved so much,’ wrote the musicologist Donald Francis Tovey, and after listening to these bracing performances few would  take issue. The Chiaroscuro takes absolutely nothing for granted – it’s like an onrush of semantic musical consciousness, where one can never quite be certain what is going to happen next. Nowhere is the shock of the new more keenly felt than in the fourth of the series, where period-instrument sensitivities are combined with a thoroughly contemporary interpretative vibe. The Menuet alla zingarese goes way beyond the quaintly gypsy-esque, the vibrato-free opening relishing the subversive cross-rhythms and subtly inflected as though it were played on an accordion. The finale’s dramatic profiling is relished with an exuberance and temporal flexibility such that one wonders afresh at the blazing ingenuity of Haydn’s creative imagination. Some might prefer the music to be allowed to settle more – leader Alina Ibragimova’s questing spirit of musical fantasy is certainly not for the faint-hearted –  yet, especially when experienced in luxurious SACD surround sound, there is no denying the potency of these revisionist musical dreamscapes.  JULIAN HAYLOCK