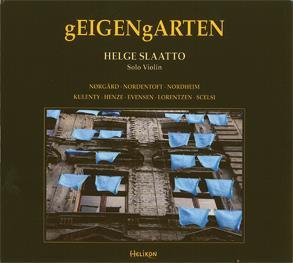 But there’s a certain sense of detachment from the music, and a lack of sparkle that’s also evident in Hannah Kulenty’s Still Life with Violin, where Slaatto doesn’t really deliver the piece’s driving repetitions with the passion that they surely deserve. Henze’s Sonata for solo violin uses a collage technique, with varied styles – drunken double-stops, stratospheric pyrotechnics, sorrowful melodies – rubbing up against each other. Yet Slaatto opts to iron out the stylistic differences, resulting in a rather samey-sounding performance.
He’s best, though, in the more introspective pieces, showing off his superb tonal control in Bent Kasberg Evensen’s poignant In memoriam, and excelling in the single-note obsessions of Bernt Lorentzen’s brittle Quartz, where his subtle pitch fluctuations and expertly judged pacing bring the music to vivid life.
Recorded sound is very close and picks up a lot of breathing and other noises, which is sometimes distracting but also adds to the immediacy of the interpretations.