Ottmar Hörl and his smiling Beethovens 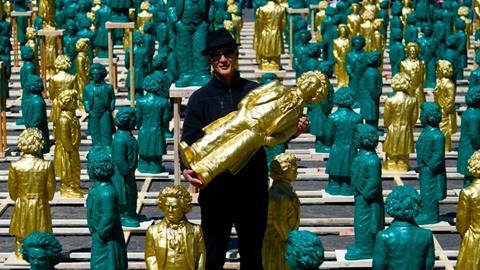 The German conceptual artist Ottmar Hörl poses next to some of his smiling sculptures representing the German composer Ludwig van Beethoven at Münsterplatz Square in Bonn, western Germany.

Around 700 sculptures by the artist are displayed in the city until 2 June as part of the festivities to mark the 250th anniversary of Beethoven’s birth.

In addition to art lovers, the statues have also attracted thieves: on early Sunday morning, two men were caught in the act of attempting to steal one from the guarded exhibition grounds. The statue was later found standing in front of a house in the city centre, before being reinstalled in its rightful spot.