From the Archive: The ‘Isador Berger’ Stradivarius violin, Cremona, 1705-10 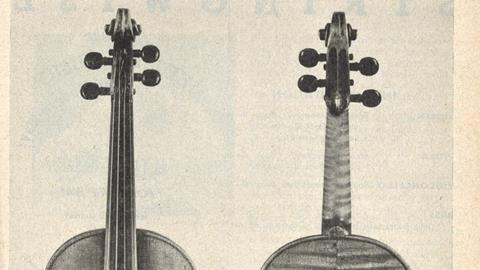 This illustration of the ‘Isador Berger’ Stradivarius was published in The Strad, November 1960. The following text is extracted from the article accompanying the photographs:

The ‘Isador Berger’ Stradivarius dates from the period 1705-1710 and is representative of the best period of his work. The instrument has for the past 70 years or so been in the possession of American owners – including Mr Frank J. Smith, of Chicago; Mr Marshall, president of Chicago gold refining company; Fassauer Ferron, a Chicago violin maker and dealer; Mr Joseph P. Rend of Chicago; and from 1943, Isador Berger, the distinguished American violinist, who owned a number of fine Italian instruments, including several by Stradivarius. The instrument is now being sold at auction.

The ‘Isador Berger’ is original in all its parts. The two-piece back is of wood with a broadish curl, not strongly marked and sloping slightly upwards. The back is in a fair state of preservation with the exception of some small cracks which have been expertly closed by a restorer.

The scroll still bears the traces of the black edging with which Stradivarius and other Italian makers decorated the heads of their instruments.

The wood of four of the sides and head matches. Two of the ribs (the left bout and the left bottom rib) are of wood with a different curl from the remaining ones. The wood of the belly, which is in two pieces, is a fairly even width of grain throughout.

The varnish is of an orange tint, that of the sides and head rather darker and somewhat crackled in appearance, that on the head noticeably so. The button is original.