From the archive: Mannerisms

A recent Teacher Talk addressed the question of how students can avoid making tense facial expression when playing. In this article from The Strad, April 1949, our writer has some words of advice for those afflicted 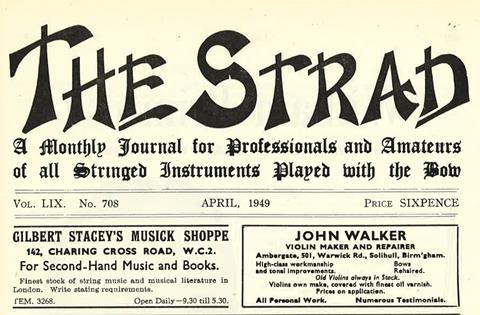 Burn’s ofted quoted words: ‘Oh wad some power the giftie gie us, to see oursels as others see us!’ loses nothing of its force and aptness when applied to the sphere of music, or perhaps I had better say musicians.

One of the characteristics of humanity at large is that nearly every individual is marked out by some peculiar and purely personal little idiosyncrasy, a long formed habit, insignificant perhaps in itself, yet quite obvious to our friends and acquaintances. It may be but the lifting of an eyebrow, the stroking of a tie or the crooking of a finger, but nevertheless there it is an by these mannerisms we are known.

This fact was impressed upon me a short time ago while at a concert. My enjoyment of a well-known concerto was rudely interrupted by an explanation from an elderly female seated just behind me, who said in a loud whisper to her companion, ‘Look at that girl’s face in the orchestra; the one playing the fiddle; isn’t it a picture!’

I glanced at the faces of the few lady violinists and sure enough one of them appeared to find her playing was causing her much pain or else she was suffering from indigestion. At every forte passage or accelerando she set her teeth and the corners of her mouth twitched spasmodically, while her brows moved up and down in sympathetic rhythm. Nor was she alone in her performance, for on looking round I was surprised to find at least half-a-dozen players whose facial contortions would have done justice to a professional ‘Merry Andrew’.

I began to feel alarmed and wondered whether they were suffering badly, but when the work was finished their faces resumed their normal state and so there was evidently no fear of complications.

This rather unfortunate habit, which psychologists would perhaps term an ‘inferiority-excitement complex’, is more noticeable in amateur orchestral players than amongst professionals. A professional performer probably regards a concert simply as part of his daily work by which he earns his means of sustenance, and a public performance would cause him no more excitement than a fairly busy day at shop or office would affect an assistant or clerk. His familiarity with his work enables him to exercise complete control over his features.

On the other hand, to an amateur performer, a concert is an event in his or her musical life and is apt to generate a feeling of excitement and tenseness which often shows itself in the facial and other bodily movements of the player.

Of course not all amateur musicians are affected in this way by any means, but three amateur orchestra (and in many choral societies as well) and as it is a weakness of human nature to seize on any observable peculiarities in others, the attention of certain members of an audience may be focused on these mannerisms to the detriment of their full enjoyment of the music.

Certainly the facial ‘oscillations’ indulged in by a few of the members of an orchestra during the performance of a symphony or concerto, etc. may necessitate a sympathetic listener closing his eyes as an only alternative to a rapid descent from the sublime to the ridiculous.

Possibly an application of will-power together with a little ‘Coueism’on the part of performers so afflicted may bring about a cure.