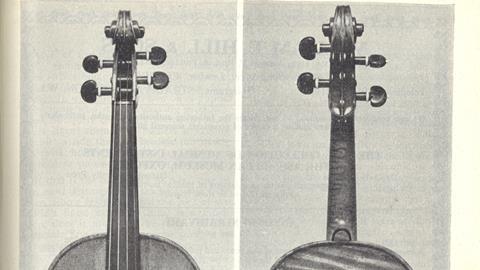 This illustration of a 1706 violin by Antonio Stradivari was published in The Strad, December 1970. The following text is extracted from the article accompanying the photographs:

There are very few instruments by Antonio Stradivari of which the history is known almost back to the day they left the maker's hand. William Corbett, whose initials are stamped on the lower rib of the handsome Stradivari illustrated here, was an eminent English violinist and composer who was connected with the Lincoln's Inn Fields Theatre during the early years of the 18th century. He was also the leader of the Opera House in the Haymarket at its opening performance in 1705.

Whilst abroad Corbett amassed a large and important library of music, together with a valuable collection of Italian violins. The source of his wealth was a mystery to his friends and gave rise to a story that he was a Government spy, employed to watch the movements of Charles Edward Stuart, the Pretender, who was in Italy during this period.

During the period 1705 to 1709 Stradivari used one piece backs for the majority of his violins. The 'Corbett' which bears a label dated 1706 is a typical example. Here the back is marked by an irregular curl of medium width slanting downwards to right. The sides are marked by a slightly smaller curl and the head by a faint small curl. The table is of pine of fine grain at the centre opening toward the flanks. The varnish is of a rich golden orange colour. The 'Corbett' measures 14 inches in length of body.