From the archive: an 1847 Joseph Rocca 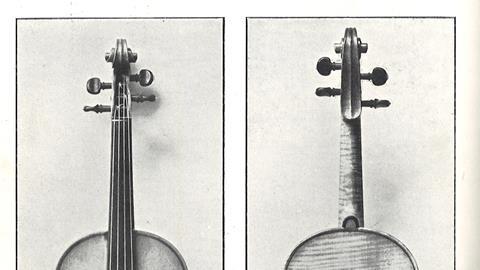 This 1847 Rocca was featured in the March 1915 issue of The Strad, accompanied by the following text:

‘There is something in the nature of evidence that the subject of this article was a member of a family of makers. That he worked with Pressenda is certain; but it is not equally clear that artist taught him his trade. He is said to have been born in or about the year 1800, whether in Genoa or Turin I have not been able to ascertain, and according to what I can learn he died in Genoa (not Turin) in either 1867 or 1868.

Some of his instruments date from the former city, but it is a long time since I saw a specimen claiming to have been made there, and I have no record of the dates. If German authority is to be relied on, he was in Genoa during some part of the fifties, 1854 being mentioned. Possibly the owner of the beautiful fiddle which illustrates this paper, or some other Strad reader, may be able to throw some light upon the point, which I have not had an opportunity of clearing up.

One point upon which there seems to be general agreement is that the maker was occasionally a little indiscreet in this habits, and paid the penalty with his life, his body being recovered from an open drain or cesspool.

His baptismal names, according to many labels, were Joseph, Antonio, but in a large number of his tickets only the first Christian name appears. Unlike Pressenda, whom he frequently copied, almost to a hair’s breadth, he never seems to have evolved a pattern which is distinctly his own, but contented himself with imitating, often with great fidelity, the works of other masters. With Stradivari he succeeded admirably, as also, through less frequently, with Guarneri, del Gesu: he is said to have made Maggini copies, but I have not met with them, though I have come across a few instruments resembling that maker in the matter of double purfling, but in no other feature.

Rocca seems to have begun to use his own labels in about 1830. The best period, so far at least as I have observed, is between about 1840 and 1855, or perhaps a year or two later. His varnishes exhibit much variety both in colour and density, the former ranging from light yellow to a very deep red or reddish brown. Some specimens of it are, as might be expected, identical with that of Pressenda; others do not bear any close resemblance to it. In some cases (usually early ones, according to my experience) very few coats appear to have been laid on, and the texture looks hard, though this may sometimes be due to the wood underneath. It never, however, approximates in appearance to that of Cremona during the classic period, as does that of J. G. Guadagnini now and again.

Like Pressenda, Rocca exhibits a decided preference for whole backs, cut on the quarter, and his material is almost always finely figured. His heads are boldly cut, and the finish of his instruments of the best class is first rate in all details, without being overdone. Such of his larger work as I have seen was fully up to the standard of that seen in the violins.

This very handsome and perfect specimen which is the subject of our plates was kindly lent by Mr. Homan, an enthusiastic admirer of Rocca, and as will be seen is one of the ‘Messie’ class of copies. Its present owner bought it from J. and A. Beare a year or two back. The varnish is a delicate rose colour, and the tone charming. The chief measurements are: length of body 14 inches; width of upper bouts 6 9/16ths; lower bouts 8 3/16ths; height of ribs 1/14 bare to full.’