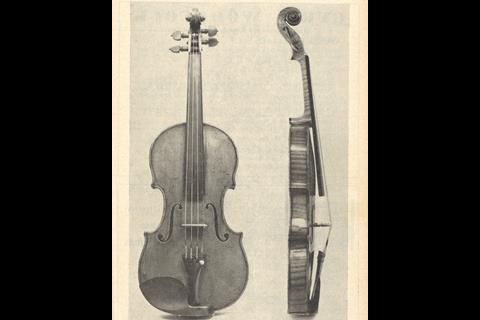 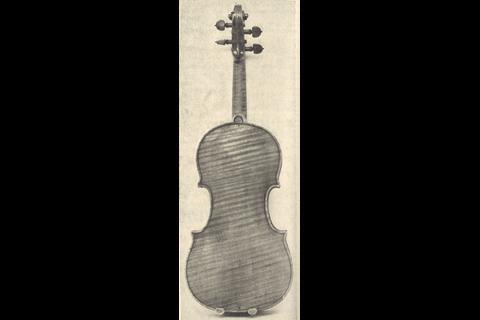 This illustration of the ‘Louis Spohr’ Guadagnini was published in The Strad, March 1962. The following text is extracted from the article accompanying the photographs:

The J.B. Guadagnini illustrated is one of the finest specimens of this maker’s Turin works in existence. Like the best Guadagnini violins of the Turin period, it is constructed of superior materials and covered with a splendid varnish of Cremonese character. The colour of the varnish, a light golden-orange, is unusual in a Guadagnini of this period.

The instrument is in an exceptional state of preservation, still having its original neck and top block with traces where three nails formerly secured the neck to the body. The pegholes have not had to be rebrushed and strengthening to the under edge is also absent. The one piece back is of handsome wood marked by a broad curl slanting downwards from right to left, that of the sides and head being somewhat similar. The table, which is in one piece, is of pine of moderately open grain on the treble, and wide on the bass side. It bears a label dated Turin 1780.

The history of the ‘Louis Spohr’ Guadagnini can be traced back for well over one hundred years. It was owned for many years by the distinguished English violinist Henry Holmes (1839-1905), who, with his brother Alfred, were both pupils of Louis Spohr. Both the brothers used this Guadagnini in turn, and there is every reason to believe that one or other of the brothers may have originally acquired the instrument direct from Spohr.

Spohr mentions in his autobiography that in 1816 he tested a number of violins in Count Cozio’s collection and that he was favourably impressed by those by Guadagnini.