From the Archive: A violin by Giuseppe Guarneri 'del Gesù', Cremona 1734, 'The Gillott' 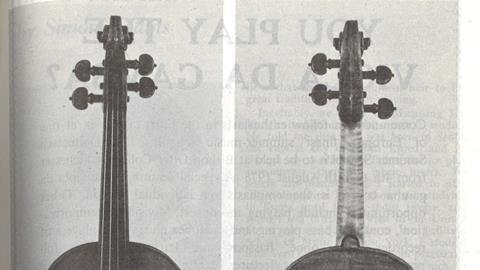 This illustration of a violin by Giuseppe Guarneri 'del Gesù' was published in The Strad, November 1977. The following text is extracted from the article accompanying the photographs:

In due course the 1734 'del Gesù' passed via John Hart's to Joseph Gillott, renowned pen manufacturer, but whose fame is more likely to be associated with his violin collecting phobia. He was the most prolific collector of all time.

The 'Gillott' is one of 'del Gesù's' happiest creations. It is a handsome violin, a word one would not apply to the later works which are powerfully built, almost gaunt in that rugged mood that distinguished 'del Gesù's' last instruments. The measurements are more orthodox than on some 'del Gesùs', the body length is only just short of 14 inches and the other figures are not greatly different from the Paganini 'Cannon'. The f-holes however are a distinct contrast, they are the restrained ones, superlatively shaped and almost unworn from the original cutting. The scroll is particularly fine - it is not the blunt, forceful one of the Ole Bull Guarneri yet just as memorable. It is a tribute to 'del Gesù' that once you have seen one of those heads you can always call it back to mind. It has been said that out of the legions of makers who have sought to copy 'del Gesù' hardly a single one has succeeded in reproducing those scrolls. Something about their individual character and strength eludes imitation. The varnish is 'del Gesù's' own kind of luminous glowing dark red, still shining with the sparkle that lights up the supreme Cremonese.

The 'Gillott' is in almost immaculate state and something that is not always in evidence with well kept old instruments that have survived in matchless condition through knowing only the care and attention plus freedom of handling by private collector owners are the many tributes to its tone.

During the period when it was owned by Hegedus he played it almost exclusively during his many world tours, thus untold numbers of listeners well able to attest to its tone. Hart describes the sounds as 'of telling brilliancy combined with unsurpassed beauty and richness.' Hegedus, when he finally parted from it, wrote: 'During my years it has served me and my art with all its embracing tone and beauty, and has been my faithful and inspiring companion. I shall always think of it gratefully and lovingly.'