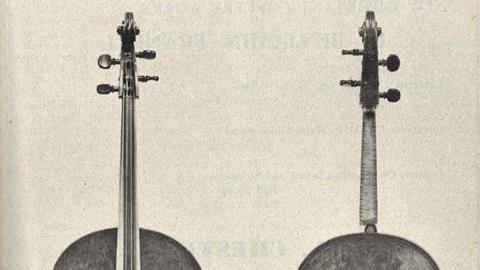 This illustration of a cello by Giovanni Grancino was published in The Strad, July 1960. The following text is extracted from the article accompanying the photographs:

A fine cello by Grancino , which was formerly in the possession of the celebrated Belgian cellist Adrien Servais (1807-1866), forms the subject of this month’s illustration.

The one-piece back, which is cut on the slab, is devoid of figure. The maker used good material acoustically, but, as it is very frequent with Milanese cellos, the wood more often than not, is plain. The front, which is winged on the flanks, is of pine of medium grain. The varnish is a deep reddish-brown. The double purfling is an outstanding feature and the flat-backed scroll is unusual.

Giovanni Grancino was a pupil of his father, Paolo, whose model he followed closely during his early years. Later, although he kept to the Amati outline as used by his father, he tended to flatten the modelling, finding, no doubt, that this modification had a beneficial effect on tone. The instrument illustrated, however, must have been a very early one, and, indeed, has suggestions of a viola da gamba of Maggini vintage.