From the Archive: a cello by G.B. Rugeri of Cremona 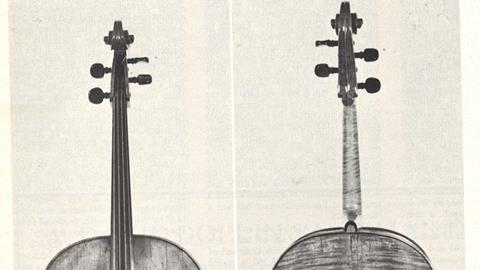 This illustration of a cello by G.B. Rugeri was published in The Strad, June 1982. The following text is extracted from the article accompanying the photographs:

This cello has a distinguished history. It was brought from Italy to pass into the possession of King George IV and then to the Duke of Cambridge; they were followed by a series of notable collectors and the cello became known as the 'Lancashire Strad'. By 1895 it had passed from Richard Bennett, another distinguished collector, to  Hill's, and now at long last Hill's decided its real attribution was to G.B. Rugeri of Cremona.

Questions of authenticity apart, this is a truly beautiful instrument. The body length is a little short at 28 5/8 inches, but this is atoned for by bold dimensions elsewhere. The instrument is finely fashioned of handsomely figured wood, the two-piece back is in an almost perfect state of preservation and to quote W.E. Hill & Sons words: '...an exceptionally fine example of the maker's work, covered with varnish of a golden colour'.