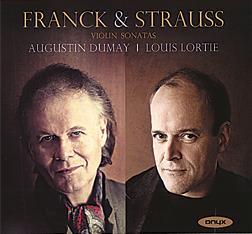 These popular sonatas both derive from the chromatic sensuality of middle-period Wagner, but whereas the Franck’s aching seductiveness sits on a knife-edge between sacred passion and secular perfume, the Strauss is a superheated machismo call-to-arms that points the way forward to his swashbuckling tone poems. Both require a pianist of virtuoso command and sensitivity, and here Louis Lortie rises to the challenge magnificently, although I wondered whether the relatively discreet piano image (the engineering is remarkably lucid and natural sounding) has a slight tendency to rob the music of its full heroic impact.

Now in his mid-sixties, Augustin Dumay is still playing masterfully with a compelling fusion of Classical poise (à la Arthur Grumiaux) and spontaneous expressive sensitivity that creates the uncanny impression of a compelling musical narrative unfolding in front of one’s ears. This works wonders in music that comes perilously close on occasion to structurally collapsing under its own expressive weight. Dumay’s flair for revealing the magic moment around which the music’s internal expressive logic revolves is just as sure as ever, as witnessed by his exultant handling of the Strauss opening movement’s triumphantly affirmative cadencing. With its invaluable fillers, this outstanding disc is a timely reminder of one of the modern violin greats.