'When Mandela asked how I was, I admitted I was nervous' - Maria Kliegel on Hommage à Nelson M.: Sentimental Work

The German cellist recalls the creation of Hommage à Nelson M., inspired by the life of Nelson Mandela – and the long road to performing it in front of the man himself 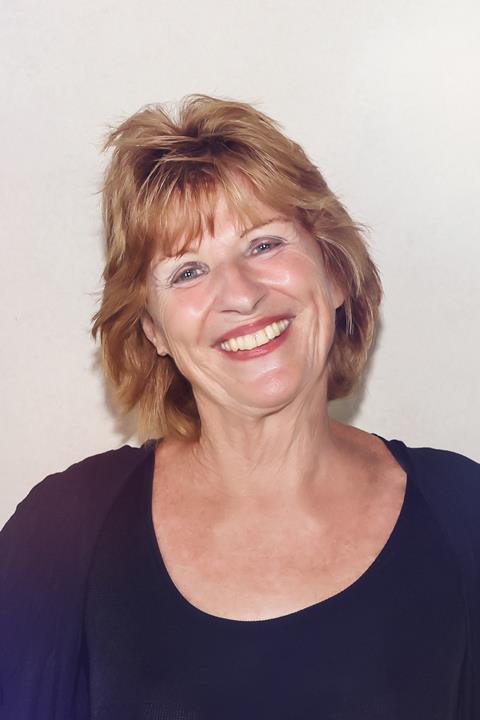 In 1995 I went on holiday to Hawaii, and I took with me a copy ofLong Walk to Freedom, the autobiography of Nelson Mandela. I was captivated by his life, his journey and his passion for social justice: it was amazing to think of how he was imprisoned at the age of 44, spent 27 years incarcerated and still remained strong, smuggling out his writings and convincing other prisoners to back him. Then four years after being released, he was President of South Africa. It was an incredible story and from then on, I was burning to meet this man.

The only chance for me to get close to him would be through music, and I thought of commissioning a composer to write a tribute in music to him. I’d been to South Africa many times and I knew how African music was so rhythmic, so I conceived a piece for cello and percussion. Then I asked composer Wilhelm Kaiser-Lindemann to read Long Walk to Freedom, which he did, and the book set him on fire as well!

Hommage à Nelson M. has a four-movement structure. The first, ‘Robben Island’, alludes to his time locked up in prison, and is filled with despair broken up with outbursts of emotion. ‘Hunting’ refers to men hunting other men during the times of apartheid, in a bebop style where cello and percussion bounce off one another. ‘Metamorphosis’ refers to the change that occurred in the country following Mandela’s release, which is characterised in the music by lots of changing time signatures. Finally, ‘Lullaby for Zaziwe’ is inspired by Mandela’s memory of holding his granddaughter, only a few weeks old, in his hands. It is based on a tune from his own tribe, the Xhosa, which ends the piece on a final message of hope. He gave her the name Zaziwe, meaning ‘hope’, while he was still in prison.

I gave the first performance in 1996 in Düsseldorf, attended by the South African ambassador and Johannes Rau, who later became president of Germany. After the performance, I gave Rau a letter I’d written, and asked him to put it into Mandela’s hands – the only way I could think of to get to him! Then I was invited to perform a concerto in Cape Town on 24 September, South Africa’s ‘Heritage Day’, and I took the chance to play the Hommage à Nelson M. in the concert too. Sadly, that day Mandela had to be on Robben Island, but his best friend and deputy president Govan Mbeki came. He loved my performance and the next day, when I met him in parliament, he said he’d tell Mandela about it. Soon afterwards, when I was back in Germany, Mandela’s people contacted me to say I could come and see him next time I had a concert in Cape Town. I offered to give him a private performance! So, soon afterwards I found myself flying back there to take up his invitation. 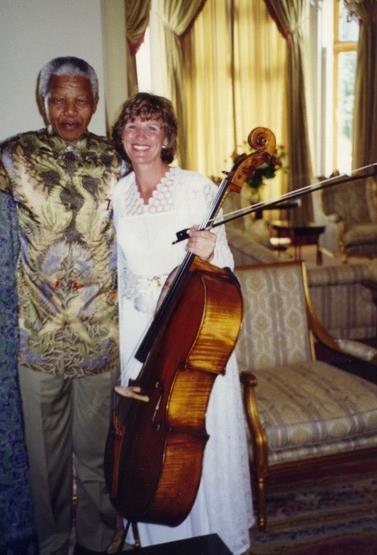 Maria Kliegel with Nelson Mandela after her performance of Hommage à Nelson M.

When Mandela came through the door and asked how I was, I admitted I was nervous. With a big smile on his face, he said, ‘I’m nervous meeting this great soloist!’ I performed just the ‘Lullaby for Zaziwe’, but for cello solo. With my bow I played long sustained open strings, while I knocked the rhythm on the back of the cello with my left hand, and sang the song Hey, Thola Thola with Xhosa text. I had to control three things at once, which would be embarrassing if I failed – but I had to take the risk.

At my last note, Mandela had tears in his eyes. His humility was incredible – a man so strong and yet so humble, with such persistence in pursuing his aims. He even allowed me to have a photo taken with him, although he’d had an eye operation that meant there could be hardly any light in the room. People sometimes ask me: after Nelson Mandela, who’s the next greatest person I’ve played for? I always answer: there’s nobody!

Read: How to develop secure intonation, by cellist Maria Kliegel