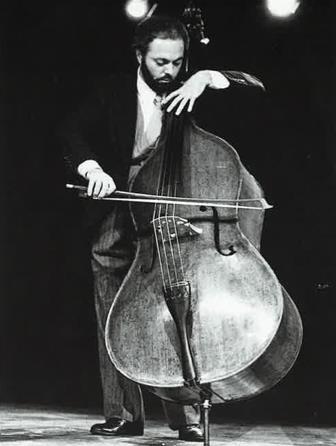 Fernando Grillo, the Italian double bassist, composer and teacher, has died at the age of 67. Closely associated with Italy’s avant-garde movement, he experimented with new forms of sound production and collaborated with composers including Salvatore Sciarrino, Harrison Birtwistle, Iannis Xenakis and Luciano Berio. Karlheinz Stockhausen once dubbed Grillo ‘the Buddha of the double bass’.

Born in 1946, Grillo studied the double bass with Corrado Penta in Perugia, where he also took cello lessons and began learning composition with Valentino Bucchi. He rapidly became interested in the sonic possibilities of the bass, conducting what he called ‘ricerca fondamentale’ (fundamental research) into the instrument’s capabilities. As well as exploring the mechanics of vibrating strings, he experimented with bowed and fingered harmonics, and examined how different types of bowing and arm gestures could alter the sound quality.

‘Before the sound, I think about which kind of gesture I must use to arrive at the sound that I want,’ he told The Strad’s sister publication Double Bassist in 2002. ‘I also use this contrapuntally: with a slow gesture I can produce a piano sound, but I can also use a very quick gesture to produce a pianissimo... I work with gesture to give the listener another, more psychological sense of the music.’

After graduating in 1970, Grillo spent two years collaborating with composer Giacinto Scelsi. After winning first prize at the Gaudeamus contemporary music competition in the Netherlands, he embarked on a series of double bass premieres, including works by Xenakis, Christian Wolff and Klaus Huber as well as several of his own compositions.

In 2000 he was appointed chair of double bass at the ‘Santa Cecilia’ Conservatoire of Music in Rome, and also gave masterclasses and lectures on the instrument at conservatoires around the world. From 1984 to 1994 he taught at the Darmstadt International Summer Courses for New Music.

Grillo played an 18th-century double bass attributed to Pietro Giacomo Rogeri and a c.1980 French bow by Horst Heinz Pfretzschner. In later years he largely withdrew from double bass performance, believing that modern composers undervalued the instrument’s possibilities: ‘I often had the impression that composers used my techniques merely as effects, not in a real musical sense, and so in the end I became more reserved as far as collaborations are concerned, and withdrew from the new music scene.’