Violinist Heime Müller on his search to cure his focal dystonia

In this Health Matters interview from 2009, the German violinist tells how a loss of full finger motion was the first sign of the movement disorder, musician's dystonia 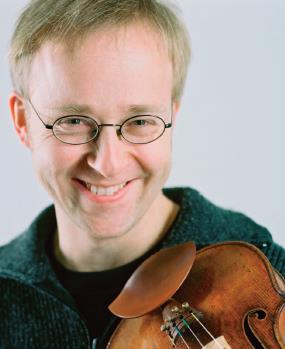 You have had to reduce your playing due to focal dystonia. What were the first signs?

It was in 2003 that I began to notice tiny things. I had a problem with the pattern that involved a semitone gap between my first and second finger, and then a whole tone between second and third fingers, such as playing E–F–G on the D string. My third finger would feel tension – it wouldn’t go down on to the D string but would go down on the A string instead. I had no pain at all with it, but I knew that it wasn’t right.

How did you try to deal with it?

I went to see a doctor straight away. He is a famous musicians’ doctor – Eckart Altenmüller, at the Institute for Music Physiology and Musicians’ Medicine in Hanover. He didn’t mention focal dystonia, but did suggest some things that I could try if it got worse, and I realised that they were all treatments for focal dystonia, so alarm bells starting ringing. He suggested, for example, changing the fingerings to try to get round the problem – the worst thing you can do with this kind of condition is to try to keep forcing the fingers to play in the correct way. My violin colleague in the quartet was very understanding and gradually took over the pieces I had played on first violin so that I could get out of the limelight.

Did you seek help from anyone else?

I tried to get rid of it by any means I could – I tried acupuncture, physiotherapy, sports doctors. I tried to read up as much as I could about focal dystonia, although I always hoped that it wasn’t that. I also went to a psychiatrist – I wanted to open my heart and see if I could find anything that might help me. It was helpful to understand many different things about myself, but it didn’t directly help my finger!

How did the condition progress?

After tours it was always worse. I did a lot of yoga, and tried to rethink my whole approach, but it was obvious that when we were just practising and rehearsing it was better than on tour – and I noticed that at the end of the next tour it was a little worse than it had been at the end of the tour before. By 2007 I realised it was happening whenever I used my third finger, not just when I used it in the original pattern that had triggered it.

How did you cope with having to leave the quartet?

In the last years I lost the joy of playing. I would go on stage and not know what would happen with my finger. It was terrifying, devastating, so that in the end it was a relief to stop playing on stage. It sounds awful to say but when I finally had to give up I was happy that I wouldn’t have to face this problem anymore.

What treatments have you been offered?

Doctors tell you there are three ways they can help you. The first is to put botox into your muscles, hoping that they get the right one. The idea is that they paralyse the muscle so that the brain understands that it can’t use it. I was always sure I didn’t want to do this, but it does help some people. The second method is taking medication for Parkinson’s disease, but at the age of 35 I didn’t want to do this. The last one is retraining your brain to learn to do without the pattern of movement that triggers the problem, but it’s very difficult to do.

How much do you play now?

I’m not playing on stage at all – I’m doing retraining and teaching a lot, but I have to avoid using my third finger, so I can just show bowings or colours but I can’t usually play a whole phrase.

Do the doctors know why you developed the illness?

One or two in every hundred musicians get focal dystonia. I’ve tried hard to understand where it came from. You look into your life but it’s not easy. I’m not one of those who was born with a violin in my hand – I had to work for everything. I always had a very strong desire to express, but sometimes not enough understanding of the technical means.

I have learnt to live with it. Of course I still find it difficult to enjoy quartet concerts. I don’t go to Artemis Quartet concerts where they play the works that were closest to my heart when we played them together. But I just went along to a fantastic concert that they gave, playing the Tchaikovsky Quartet no.2, and I felt so proud that I used to be a member of this wonderful ensemble.

Are you optimistic about going back on stage?

Of course I’m optimistic, but I should not plan on it in the near future. That would put the pressure on, which is the last thing one should do with focal dystonia.

Violinist Heime Müller played with the Artemis Quartet from 1991 to 2007. In 2003 he developed focal dystonia. He is now professor at the Universität der Künste in Berlin and the Musikhochschule Lübeck and at the Escuela Superior de Música Reina Sofía Madrid

This article was first published in The Strad, April 2009.