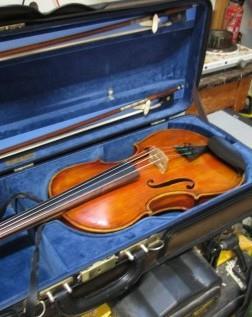 Edinburgh-based luthier Steve Burnett has crafted a violin to commemorate the outbreak of the First World War in 1914. The ‘Wilfred Owen Violin’ was created during a six-month period from the branch of a sycamore tree growing in the grounds of the former Craiglockhart War Hospital. It was here that the famous wartime poet underwent treatment for shell-shock in 1917 and met fellow poet Siegfried Sassoon.

‘For some time I had in mind to make a violin to honour the memory of Wilfred Owen, Siegfried Sassoon and their generation,’ said Burnett. ‘Now is the most fitting time to realise this idea. Inside the violin are the words of Owen’s pre-war poem, ‘Written in a Wood, September 1910’. We have chosen a limb from a sycamore tree growing alongside a lovely copper beech tree at Craiglockhart and this will make this a poignant statement of the sacrifices of that generation.’

The instrument will be housed in the War Poets’ Collection at Napier University’s Craiglockhart campus. It is planned that the violin will be used on tours of the UK and abroad, and in educational visits to schools as a symbol of peace.

The Strad's August issue, commemorating the string players of the First World War, is out now.