Do top ten lists miss the whole point of music?

The compulsion to rank performers by number denies the subtlety and diversity of their craft, argues Ariane Todes 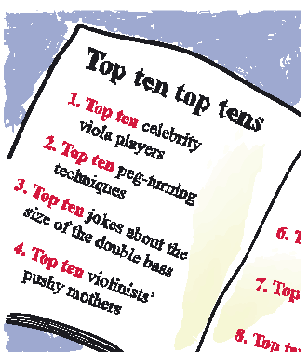 Top ten this; top forty that. Barely a week goes by without a three-hour television programme compiling the top hundred films, comedians, adverts – whatever – ever. Or magazines whose covers boast the ‘definitive’ top ten of footballers, opera singers, pop songs. Am I going to follow suit in The Strad? Definitively not.

For a start, what follows in these programmes is often a random collection that fulfils the needs of the copyright fee payers, advertisers, or Z-list celebrities providing the facile commentary. If they’re generated by experts or voted for by the public, the results are also skewed: Empire magazine’s top 40 films voted for by readers features only six from pre-1970, for example, while Turner Classic Movies’ compilation of top 15 influential films stops in 1977 with Star Wars. The obvious conclusion is that such lists are entirely subjective and meaningless.

Suffice it to say, you won’t be getting a list of the top hundred string players of all time in this magazine, as long as I can help it. Instead, we have run a series exploring the playing of some of the historical giants of the violin. Each of them passes the ‘20-second test’: if you hear them on the radio, you know within 20 seconds who is playing (arguably a quality lacking in many of today’s players). Each is unique, with a distinctive sound, style, repertoire, artistic journey and, yes, even their own personal weaknesses – they were human after all.

How could you possibly put them in order? As Bartók once exclaimed, competitions are for horses, not for artists. You might be able to compare players’ percentages of correct notes, dynamic ranges or speed of trills. But beyond that, everything is subjective: sound, interpretation, imagination, persuasiveness. Each of these players has a unique DNA that expresses itself through these elements, and each listener reacts in a way that expresses their own preferences. And even those are flexible. To adapt the old Jewish joke, gather five string music lovers in a room and you will have twelve different opinions about who is the best violin player ever.

The joy lies in getting to know each of them – what they say, how they say it – being excited and moved (or not), and then starting all over again with someone else. Diversity and freedom of expression are part of the musician’s Bill of Rights – without them, everyone would perform the same music exactly the same way, and how much fun would that be? Yet this is the logical corollary of top tens – that there’s a ‘best’ way to play something and whoever plays like that is ‘the best’.

Another aspect of the current obsession with ranking is the star rating systems that many magazines use with reviews. We had heated discussions about these when it came to redesigning our own reviews section. You can probably guess how I argued. For any pretension to truth about such ratings is illusory. That is the beauty of what we do. Music represents life in all its variety, complexity, nuance, transformational power and fragility. Now why would we pin all that down and attach a number to it?

This article first appeared in The Strad, June 2009. Subscribe to The Strad or download our digital edition as part of a 30-day free trial.