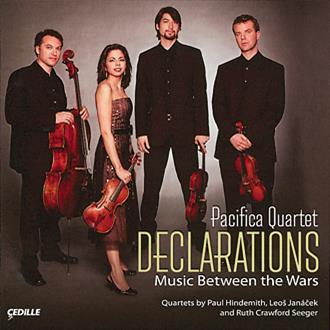 Comparisons are available for all these works, but they are rendered irrelevant both by the programming and the playing, which reconstruct a sense of what it might have been like to be living through and composing music in the 1920s. Dangerous? For sure, but in which direction? Janácek, doing his best to ignore the march of modernism and an embittered marriage; Ruth Crawford, embracing high serialism from a New York eyrie; Hindemith, perhaps most intriguingly, trying to reconcile old-German structural principles with a sense of ‘music for the people’ and the value of Bartók’s challenges to orthodoxy.

Somehow, the Pacifica does justice to all three. Doubtless the confident, even relaxed plotting of the Crawford benefits from the quartet’s extended work on Elliott Carter; it also lends a biting edge to the Janácek, which does not let up for a moment – perhaps at the expense of its lyrical moments: you would never confuse this for a home-grown account, but that is not at all to its detriment. Here and in Hindemith’s op.22 (1921), the quartet takes slightly more time than others, and uses it well. The flow of Hindemith’s opening free-form fugato gives notice of much careful preparation, and the ferocity of the two scherzos even rivals Bartók’s Fourth (composed seven years later) with no compromise of tuning or clarity (complemented by a fine recording, not too close). Is the central slow movement jaunty or threnodic? Either way, it’s under fierce pressure which the Pacifica’s delicate, watchful approach resists without resolving. Rarely has the old Confucian curse sprung to life with such ambivalence: ‘May you live in interesting times’.