Layale Chaker on the violin as cultural chameleon 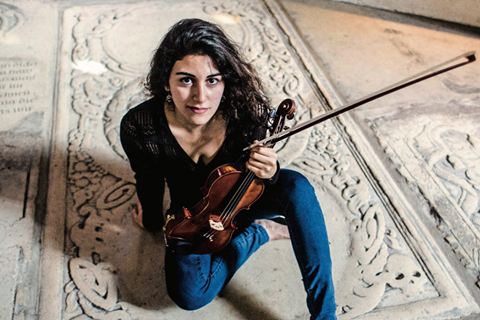 The violin has always been the wanderer’s instrument. It is partly why it has ended in my hands, and why it is claimed so easily and so differently by most people around the world. Like a chameleon, its range, colours and tonal centres effortlessly blend into any musical dialect it lands in. Yet this hybrid creature always remains at the margins, more at ease in playing the role of cultural bridging than carrying symbolisms of true authenticity.

It is one of the few unjaded butterflies of Babel, curious about all the languages, accents and figures of speech it encounters, and it has transmitted that curiosity to my playing. If one can admit that their instrument is the extension of their body, they can also admit that it equally extends their intellectual and emotional being - it is perhaps where the inquisitive aspect of my music-making has started to manifest, once I have understood it as an inherent part of the history and soul of my instrument.

This self-determination shines as much through Bach, Mozart and Berg as it does through improvisations and new works

The ways that we are born and live our lives today give us plenty of reasons to want to leave our Babel towers, and go into the world looking for the shared shades in our different languages. I have only started realising this after I noticed that in my search for a clean, crisp and polished violinistic sound in the most classical sense, I was shedding off layers of my own personal history, influences and musical psyche.

After a brief time looking for the other extreme of what would sound like a sound most authentic and stylistically adequate to Arabic and Ottoman classical repertoire, I have then come to embrace all elements of my technique, acquired and less-acquired, instinctive and matured, as the potential of a personal palette.

My colours now extend to the combination of vibrati inspired by different wrist, finger and arm vibrato techniques I have seen by performers of bowed instruments across different traditions. I’ve also found that I’ve been trying to adopt a blow hold generally closer to the fingerboard, in order to use, by contrast, the intensity of the contact points on the other end in key moments, but also to be able to work with air and breath in a closer manner.

It is a lifelong process and I have still yet to expand on these techniques in order to further develop my sound. But in the vein of that same openness, countless possibilities unfold; and beyond the process of un-learning and re-learning, you find yourself allowing your fingers to discover a new way to make your note undulate similarly to that of the duduk or mejwez that populated your childhood, your bow finding new contact points, divisions and speeds to grasp the breath of the ney or the sarangi, your phrasings and intonations bending in and out to better serve your melodies.

Your relationship to your instrument therefore changes into a true dialogue, as you strive to expand its essence the way its expands yours, instead of constantly trying to tame it.

Beyond the quest for a personal sound, the most rewarding part of this mindset in music-making is how liberating it can be to the performer. This self-determination shines as much through Bach, Mozart and Berg as it does through improvisations and new works, and the act of composition itself.

But the ultimate beauty of it is its communicative nature, and its capacity to manifest in collective music-making when introduced and carried by not more than one performer.