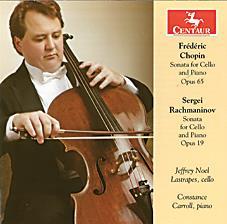 Rachmaninoff fares better in the hands of Jeffrey Noel Lastrapes than Chopin, whose elegant phrases sound overloaded with emotion in his hands. In the Rachmaninoff Sonata, Lastrapes’s wide, fast vibrato and muscular bowing find their ideal expressive home. Both the Andante and the finale’s second subject overflow with feeling, and it’s hard not to be carried on its wave. The American duo creates an effective sound world of low rumblings and rounded C-string tone at the opening of the Allegro scherzando, but unfortunately the finale is rather earthbound and the finer detail throughout is lost in a slightly boomy acoustic.

In Chopin’s Sonata, Lastrapes’s portamento is often well chosen but sometimes overdone. His cello, a 1684 Rugeri, has a strong tone high on the A string, but his fast vibrato can give an inappropriately urgent feel to the music, although in the Largo the players create an atmosphere of beatific calm. However, Lastrapes, who studied with Harvey Shapiro at the Juilliard School and now teaches at Texas Tech University, frequently ignores Chopin’s dynamic markings, and there are just too many imperfections – the intonation not always quite centred, minor faults in shifts and tone quality – to justify recommending this recording.