The British firm held its final instrument sale on 11 May 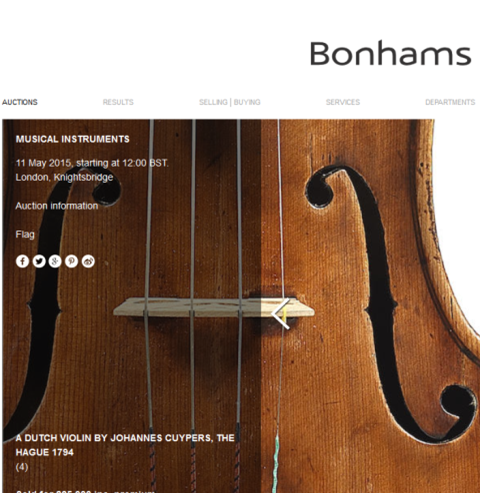 British auction house Bonhams is to close its musical instrument department, it has been confirmed by branch head Philip Scott. The division’s final sale was held on 11 May ahead of its closure at the end of the month.

The move follows musical instrument department closures at both Sotheby’s in London and Christie’s in New York in recent years.  In January 2013, auctioneers Tim Ingles and Paul Hayday left Sotheby’s to form their own specialist auction house and dealership. Ingles & Hayday continues to hold its twice-yearly sales at Sotheby’s New Bond Street premises. Similarly, Christie’s New York shifted all of its instrument activities to private sales in May 2013, keeping head of the musical instrument department Kerry Keane as a consultant.

Philip Scott, who has worked at Bonhams since 1985, confirmed to The Strad, ‘I am indeed leaving Bonhams after many enjoyable years.   I haven’t yet finalised my plans for the future but I fully intend to stay in the world of musical instruments and am looking forward to some fresh challenges.’

Founded in 1793, Bonhams deals in fine art and antiques in 60 specialist areas in 25 countries.