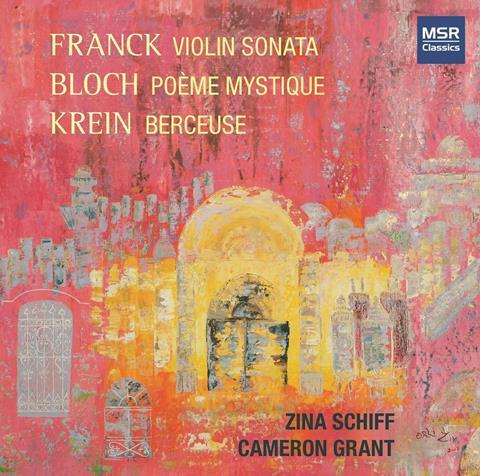 There is rarely adequate justification for another recording of Franck’s Sonata in the already overcrowded catalogue. Zina Schiff and Cameron Grant’s account is no exception, falling short on flair and expressive contrast. They offer a relaxed, contemplative rendition of the opening movement but restrict themselves to a narrow dynamic and timbral range. Their restrained, low-voltage Allegro lacks the passion, drama and drive of most of their competitors and their finale, too, seems pedestrian and less impulsive than might be expected. Their reflective third movement, though flexibly interpreted, begs a more varied tonal palette.

These players’ performances of the rest of their programme are as different as chalk and cheese. They play the melody of Krein’s pleasing, ternary Berceuse with due soporific breadth and intimate expression, adapting their approach admirably for its more complex, Scriabinesque centrepiece. They fully empathise with Bloch’s vision of ‘idealism, faith, fervour, hope’ in his single-movement Second Sonata, in which Jewish themes flank the plainchant Credo and Gloria, and persuasively convey its lyricism, fantasy and emotional warmth. Schiff substantially meets the work’s various technical challenges, venturing into the stratosphere with deft assurance and realising its rhapsodic lines in gentle, reflective manner. The recording is clear and vibrant.