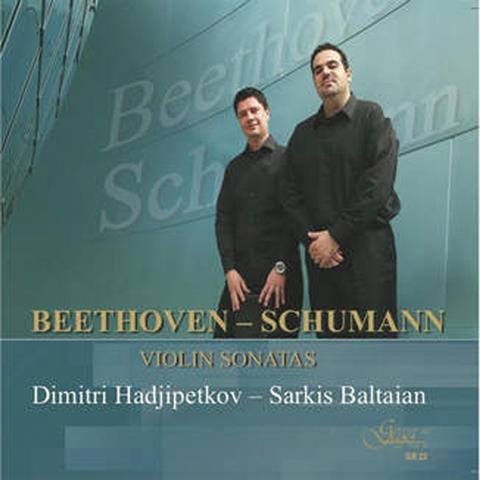 Dimitri Hadjipetkov and Sarkis Baltaian give a firm, incisive performance of Beethoven’s A minor Sonata, opening with a high-spirited dash through the Presto, punching out the staccato quavers and attacking the sforzandos and accents. The staccato semiquavers of the Andante are similarly clean and focused; the interplay of parts in the fugal sections is nicely done, and robustly too when marked forte. The final Allegro flows splendidly forwards. Perhaps because the recording is so close, in a hall with a bit of echo, truly soft playing is sparse; but this is a forthright, open-hearted performance. Their playing of the F major ‘Spring’ Sonata is more mellow and nuanced, both energetic and gentle, with elegant simplicity in the second-movement Adagio and a sort of drawing-room refinement in the cheerful finale.

Hadjipetkov’s tone in the first movement of Schumann’s A minor Sonata is slightly veiled, the long lines admirably buoyant and fluent at the composer’s stately tempo. His playing is full of subtle coloration and the coda leads from mystery to drama. The second-movement Allegretto has an easy charm and the pair neatly draw Schumann’s constant changes of pace and character into a coherent, quirky narrative. The finale scurries along, light and dancing.