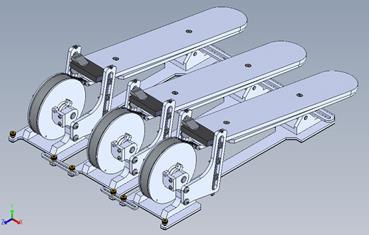 A young US double bassist and composer is developing a pedal system to allow bass players to change the pitch of strings while playing.

Carter Callison, a doctoral student and Manson Composition Fellow at London's Royal Academy of Music, has raised $8,000 through crowdfunding website Kickstarter to finance the production of a prototype of his Scordatura Pedals. He hopes the system will expand the capabilities of the bass and enable players to use more eclectic tunings.

Callison's system features an individual tailpiece for each string and an aluminium tuning block on the back of the tailpiece that allows the string's pitch to be changed through the motion of a lever. The tuning block is attached by a cable to the aluminium pedal itself, which is similar to a harp pedal in that it can move not just up and down, but also from side to side. The player modifies the pitch of the string by pressing on the pedal, which has a pulley mechanism to displace the tension of the string. For more technical information and design drawings, see here.

Callison explained that the reason why each string has its own tailpiece in his design is to remove the string compensation that occurs when all strings share a tailpiece. 'Commonly, with a normal tailpiece, if you drop one string down a whole tone, for example, the other strings will go sharp. This is mostly due to the tailpiece having all of the strings. So I experimented with removing the tailpiece completely and just had individual strings. Then when I retuned the strings, they all held their pitch.'

Callison believes the system has the potential to revolutionise the bass repertoire, both in terms of new compositions and in terms of a new library of transcriptions that would have otherwise been unplayable. He also sees the idea as a way of bringing together all the different tunings that the bass has used through history. He said:

'There's been a big comeback in 5ths tuning in recent years – led by musicians like Joel Quarrington – as opposed to 4ths tuning. And when you look at orchestral bass repertoire, there are an amazing number of pieces and passages where 5ths tuning is much more idiomatic. But then there are just as many places where it's not. Berlioz wrote in his Orchestration Treatise that an orchestra's double basses should have a variety of different tunings, as it would make the entire bass section sound more cohesive. My system is a kind of solution to that, but from an individual standpoint, as opposed to a whole section having different tunings.'

The design for the Scordatura Pedals is currently US patent pending. With funding now in place, Callison said he expects that a working prototype will be ready within the next month or two.