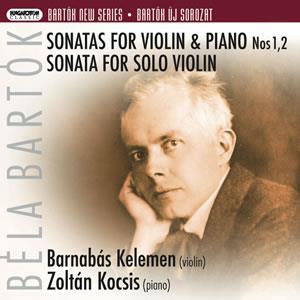 Barnabás Kelemen takes a muscular approach to Bartók’s three sonatas (in this he is not alone). He and Zoltán Kocsis give an extraordinary performance of the First Sonata, full of fire and drive. They negotiate the multifaceted first movement with fierce and unflinching narrative propulsion. In the unaccompanied sections of the central Adagio, Kelemen is flexible, hushed and concentrated (albeit with rather a lot of breathing thrown in – the microphones are up close). The finale is a real tour de force, with Kelemen fizzing away on the G string.
The Second Sonata has a great narrative sweep. The opening semi-improvisations have a trance-like air, and the constant changes of pulse and character that follow, as one folk idiom gives way to the next, have an unimpeachable logic. The final bars wind down magically, from the final ferocious outburst of the much-varied opening theme to the ethereal, wide-spaced final chord.

With such superb playing from both artists, simultaneously raw and refined, violent and poetic, it is almost a shame to lose Kocsis for the Solo Violin Sonata. Here the playing seems a bit too muscular at times – does every loud note on the G string need to be quarried out so aggressively? – and Kelemen takes some of Bartók’s tempo changes with a pinch of salt. But there is beautifully shaped melodic playing in what is in all a compelling performance.