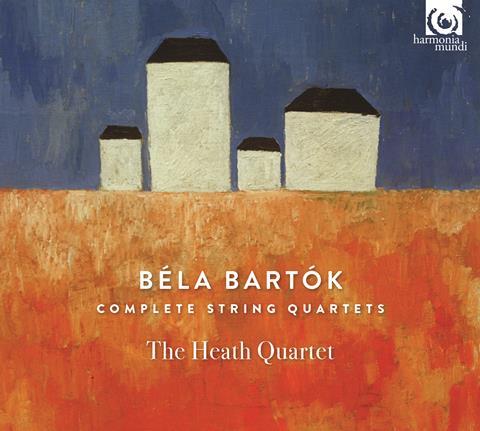 This complete cycle of the six Bartók string quartets finds the Heath Quartet at the top of its game. Although not credited anywhere on the CD packaging as being recordings of live performances, these are in fact those very ones heard by Peter Quantrill over two evenings at Wigmore Hall last year (reviewed September 2016). There’s not a hint of audience noise, and both the immediacy of the quartet’s sound and the hall’s enviable bloom are beautifully caught by Harmonia Mundi’s microphones. Moreover, the sense of precision across all six works is remarkable for a concert setting in which the players exhibit almost superhuman concentration and stamina. If there’s a downside to this focused approach it’s the slight sense of a lack of spontaneity and daring gutsiness in Bartók’s grittier writing – the scherzo of no.2 is a case in point, which has sounded more furious in other hands. The Heath players are hardly alone in not keeping to the composer’s OCD timings and metronome markings in his later scores; these performances are consistently slower overall, but they don’t feel held back in that sense. Indeed, there’s energy throughout, conveyed through articulation and bowing, and even the slower parts, such as the fragile Mesto music of the Sixth Quartet, are imbued with tension and forward motion appropriate to the emotional purpose. The string tone throughout – varied as it is by Bartók’s numerous indications – is flawless, and ensemble work is exemplary, from the instances where well-matched violinists Oliver Heath and Cerys Jones seamlessly hand the melodic baton between each other to the rhythmic acuity of the more complex, hocketed writing across all four instruments. In short, if there were any argument for yet another recorded cycle of the Bartók quartets entering a crowded market, this is it.