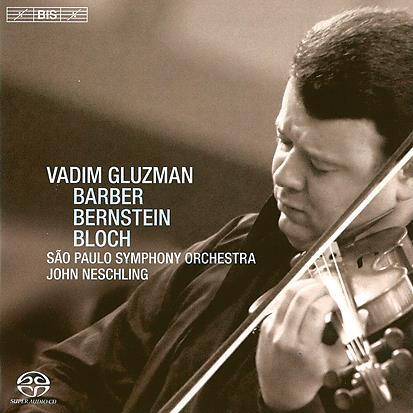 Barber’s Violin Concerto is a notoriously difficult work to bring off convincingly. The Walton-like nostalgia of the first two movements is counterbalanced by a?finale whose hurtling forward momentum feels slightly out of place in such expressive surroundings. Stern (Sony) and Perlman (EMI), both essential listening, unintentionally exaggerate the stylistic discrepancy with their unguarded emotionalism, whereas Vadim Gluzman achieves a greater sense of belonging by imparting a chaste innocence and purity to Barber’s golden lyricism. He may not?pull at the heartstrings with such feverish intensity, yet by emphasising 20th?century restraint rather than 19th?century indulgence, he creates a?more convincing case for the music’s place and time.

This approach also works particularly well in Bloch’s Baal Shem, a work that is often forced into carrying an emotional weight way beyond its intermezzo-like scale. Finest of all is Bernstein’s Serenade, which after nearly half a century on the fringes of the regular performing repertoire has become a favourite for the rising generation of young virtuosos. The music’s bracing all-inclusiveness can easily become arch and camp in the wrong hands, which makes Gluzman’s undistracted naturalness doubly welcome, especially as he receives highly attentive support from John Neschling and his São Paulo players, caught in typically detailed yet weighty BIS sound.