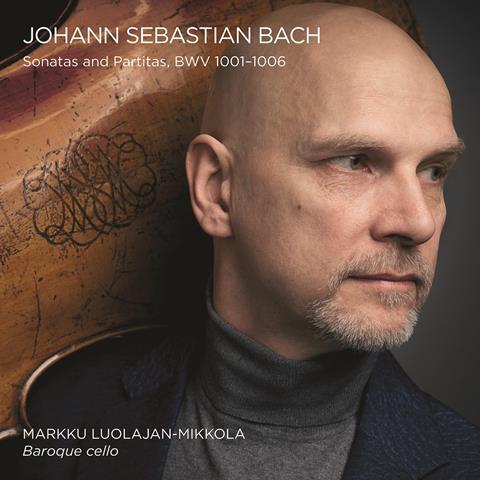 If the six Sonatas and Partitas for solo violin are, in Enescu’s words, ‘the Himalayas of violinists’, then playing the entire set transcribed for Baroque cello must represent an extra day’s trek at least, probably barefoot. After 40 years of immersing himself in the Cello Suites, the Finnish cellist, violist and gambist Markku Luolajan-Mikkola has risen to the challenge, and carries off this technical tour de force with impressive strength and dexterity.

Whether it is a wise musical choice is another matter. The violin works have more black notes, more double-stopping and far denser counterpoint than the Cello Suites. Hearing them transposed down an octave and a 5th (to preserve the corresponding pattern of open strings), I constantly missed the violin’s brighter and more fluid tones. Although simpler movements like the Gigue of Partita no.3 are still delightful, others suffer in the lower tessitura – the Siciliano of Sonata no.1 no longer has the same delicacy, and the frequent passages of low double-stops can sound constipated.

Luolajan-Mikkola plays a Baroque cello of c.1700 by Barak Norman with gut strings. Close miking and skilful recording capture the strings’ earthy sound and ensure none of the rapid low notes are lost, but nor do they ring out as they would on a violin. Listening to these discs, I could not help feeling that Bach, in spite of his practice of transcribing his own music, was totally aware of which instrument he was writing these particular works for – and it wasn’t the cello.