Ask the Experts: how to choose the right violin rosin

Strad readers submit their problems and queries about string playing, teaching or making to our experts 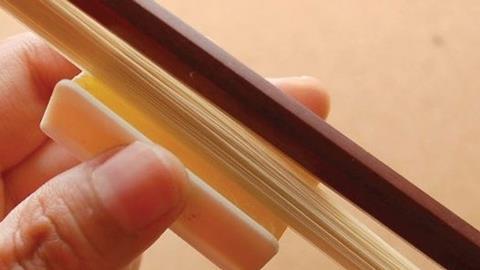 In the latest in the series a reader asks about choosing the right rosin, in terms of colour, brand and price. Three international rosin makers offer their advice.

The dilemma I have long been confounded by the variety of different rosins available for bowed stringed instruments. For example, is there a vast difference in quality between gold rosin and black rosin? Does the colour of rosin affect the resulting tone quality? Can one’s choice of rosin have a detrimental impact on string or bow hair longevity? Is there a vast difference between different brands of rosin? And does price equate to quality? GINO GLAGGINA, RAMSBOTTOM, UK

ADRIAN MUELLER Each manufacturer has their very own specific procedure for making rosin, which they protect as a strict secret. As a result, all rosins today differ in quality, and all have a huge impact on an instrument’s sound colour. So it is important for musicians to choose a rosin that allows their bow to have the most ideal contact with the strings while playing.

High-quality rosin allows for perfect bowing without scratchy sounds, especially if only a thin layer of rosin is applied. The general rules are these:

• violinists and violists use a harder, drier rosin

• cellists use a medium strong rosin

• double bassists use a softer rosin

Another important aspect is the core material of the strings that are being used: steel strings are more easily played if you use a hard, dry rosin, whereas for synthetic, gut, and gut-wound strings you need use a softer rosin. Moreover, experienced players prefer softer rosin when playing in a studio, and harder rosin in a concert hall. Hard rosin works best in tropical climates, while soft rosin is good for the cold.

The composition and production method of Pirastro’s Gold (light) and Black (dark) rosins are very similar, resulting in comparable features and handling. However, the Gold rosin has a slightly higher adhesion force.

The diversity of colours of different rosins is great, and the colour of each rosin indicates its quality and usage. But it is impossible to determine the hardness and quality of rosin solely by its colour. The reason is that there are many other ingredients that determine the quality of rosins.

The choice of rosin is a very personal matter and depends on each player’s individual preference concerning playability, playing style and sound taste. The price level indicates how complicated and time-consuming the production process of the individual rosin was.

ANDREW BAKER Differences in qualities of sound and response (S&R) depend on a number of factors, such as the species of the tree and the environmental and climatic conditions of where it is grown. Even more important is the method of extraction from the tree and how the rosin is distilled.

Rosin can be extracted in two ways. It can be ‘tapped’ from a cut in the trunk (this is called gum rosin), or extracted from tree stump pulp using a chemical-based method (wood rosin). Very generally, gum rosin tends to be more brittle and powdery, and wood rosin softer and more tacky.

It then needs to be distilled (through a steam distillation process) before it can be used. Distillation removes volatile chemicals (turpentine oils) from the raw resin, leaving the pure rosin. However, rosin can be distilled to varying degrees, which also affects S&R. Partly distilled rosin will be darker in colour and feel grittier on the string, whereas completely distilled rosin is almost clear in colour and has a much smoother feel on the string. The more the rosin has been distilled, the more ‘stable’ it is, meaning its qualities will remain the same for many years.

It is impossible (in my opinion at least) to say that one colour, species or type of rosin has a particular type of sound, as they all differ in some way. Furthermore, the differences in S&R are entirely subjective. Using cheaper or more expensive rosins won’t have a detrimental impact on the longevity of the bow hair or string, but I personally wonder if the use of metal powders in some rosin can affect string and varnish longevity – a question yet to be answered.

BRUCE PERRIN I understand why you and many other players have been confounded by the variety of different rosins available for bowed instruments. There are so many different brands at many different prices, some making extraordinary claims for improving tone and performance. The brands I have knowledge of are Hidersine (dating back to 1890), A.B. (first marketed in 1896) and W.E. Hill and Sons (established in 1762, although it is not documented when its rosin brand was introduced).

All three brands use a similar raw ‘rosin’, but each one has different additives, based on recipes well over a hundred years old in each case. Hidersine and A.B. have natural wax ingredients as part of their recipes and W.E. Hill are natural oil-based. One can imagine that a similar pattern of manufacturing emerged in many other countries, long before global trade as we know it today. It could help explain why there are so many brands available, with manufacturing spread all over the world.

It is the cost of the ingredients that determines the price of the product. The colour of the rosin is also because of the ingredients used, and in my opinion has very little effect on the way the rosin adheres to the bow hair. It really does come down to personal preference.

It’s also worth noting that a big part of the cost of producing a product is its packaging and its eventual route to market. An expensively packaged product that is heavily marketed has an oncost that is ultimately funded by you, the consumer.

Adrian Mueller is the technical director of Pirastro: www.pirastro.com

Andrew Baker is a violinist, and the founder and rosin maker of Leatherwood Bespoke Rosin: www.leatherwoodrosin.com.au

Read: Ask the Experts - how to keep your instrument clean

Read: Ask the Experts - how to combat unravelling strings