In residence: The Coull Quartet at the University Of Warwick, UK

This year the group marks its 40th anniversary at the English university – a place of stability that has allowed the players to experiment musically and to engage with all academic departments, finds Toby Deller 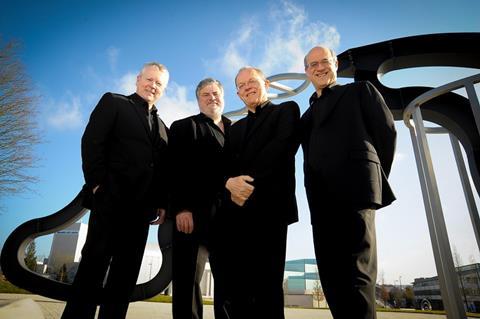 The following is an extract from a longer ‘In Residence’ column in The Strad December 2017 – to read it in full, download the issue on desktop computer or via the The Strad App, or buy the print edition

‘I remember Sidney Griller saying, “You don’t want to be in London – it’ll pull you apart,”’ recalls Philip Gallaway, second violinist of the Coull Quartet. ‘And there’s some truth in that: if you’re away from it all then you have to focus on the quartet whether you like it or not.’

The university gave the musicians their own base where they could rehearse and an on-campus venue in the form of Warwick Arts Centre in which to perform. They were thus able to build up a conventional quartet career – performing and broadcasting internationally; recording around 25 CDs; commissioning music from the likes of Robert Simpson, Nicholas Maw and Sally Beamish; and teaching at summer schools – without having to chase individual freelance work elsewhere. In exchange, they were asked to coach and play in the university symphony orchestra and to give lessons to students, all of whom study subjects other than music – although there is a large and thriving musical community at the university, it has never offered a specialist music degree.

The residency has had its own direct influence on the group’s development. ‘We have become more adventurous,’ says Gallaway. ‘I can imagine that if we had been asked when we arrived if we would like to perform a piece for four table tennis players and string quartet, we would have laughed. But it’s actually very good and we enjoyed doing it.’ That piece was Ping! by Joe Cutler, which they performed as part of the 2012 London Cultural Olympiad (see video below).

To read the full article, download The Strad’s December 2017 issue on desktop computer or via the The Strad App, or buy the print edition