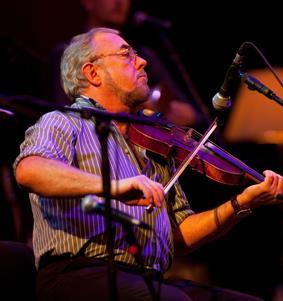 Shetland fiddler Aly Bain received a lifetime achievement award at this week's BBC Radio 2 Folk Awards, held as part of the Celtic Connections festival in Glasgow. Bain (pictured left) has been active on the folk scene since the late 1960s and has arguably done more than anyone else to promote Scottish fiddling.

He told The Strad in an interview in April 2012: 'When I first started, in about 1968, the instrumental scene in Scotland was in a very bad way – almost on the point of dying out. The post-war generation wanted everything new, so the music went out of fashion. People forgot their own culture.' Bain spearheaded a traditional music revival, helping to reintroduce folk music into Scotland's schools and music societies.

Known for his long collaboration with accordionist and composer Phil Cunningham, Bain was a founder member of Scots–Irish group Boys of the Lough, and has been a mainstay of the BBC's Transatlantic Sessions TV series. He was awarded an MBE in 1994 for his services to music.

Fiddle players Duncan Chisholm and Sam Sweeney were both nominated for Musician of the Year, but the award went to Northumbrian piper Kathryn Tickell.