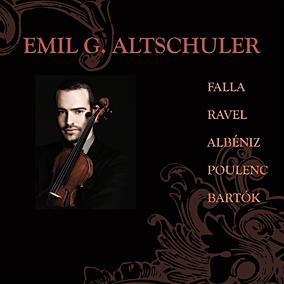 From the start this CD is let down by its recording quality, which, despite a seemingly close-in mic, often renders the violin metallic and thin; the piano sometimes sounds disconcertingly electronic. Emil Altschuler likes power, and occasionally notes disappear altogether when he bears down on the bow and renders whole phrases as an ugly scrunch. He has what might be called an old-fashioned style, with heavy vibrato and a lot of portamento, particularly in the Falla and Ravel arrangements. Perhaps he is aspiring to a Kreislerian warmth and melodic charm but Kreisler never sounded as if he was trying this hard. When Altschuler gets to some real Kreisler arrangements, there are elegant rhythmic touches; but where the going gets tough, his spiccato gets picky and his double-stopping aggressive.

For Poulenc’s Sonata he uses a bigger palette, with impassioned melody in the first movement and flexible, expressive playing in the second; he scampers purposefully through the moto perpetuo sections of the finale. In Ravel’s Tzigane Altschuler’s tendency to play as if intent on sawing the violin in half is much to the fore. He can cope with the technical demands well enough, although the double-stops are sometimes splashy, but there is more grim determination than gypsy fire. By the way, there is no booklet.