A twist on tradition 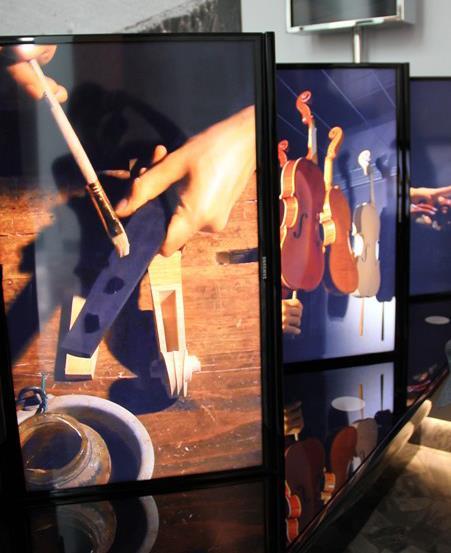 How to bring alive the world of violins and violin making for a non-specialist audience, for the culturally minded tourist or day tripper? That must have been an essential question for the designers of Cremona's Museo del Violino, and it's one they've answered with a largely successful marriage of technology and tradition.??

The tech comes to the fore in the first main room of the museum, after you enter via a passage explaining the origins of the violin and then peer at a reconstruction of a contemporary luthier's workshop – there was a maker there when I visited, doing some rough arching. Slick, interactive touch-screen displays give visitors the chance to explore the different parts of the violin and bow, and see the various stages of their construction (pictured). There's also a table-top animated map of Cremona at the time of Stradivari. Kids were happily swiping away at all of these, although I noticed some of the other visitors standing a little bemused, wondering what they could and could not control, and why sensors were not responding immediately when touched. (What's wrong with having a few buttons? Children love them, and surely not every museum gizmo has to be touch-controlled to satisfy our demand for all things new.)?

One neat feature is a digital wall map showing the growth in the number of violin makers, and their distribution across the world, over the centuries. To the side is a sound meter-type bar showing the increasing total, and on the map itself, as the little red dots spread beyond Europe – in North America, South Africa, Australia, Latin America and China – it's like watching the progress of a benign pandemic. One wonders where the most clustered areas will be in 20, 50 or another 100 years.??

All the multimedia, though, is really just an appetiser for the instruments themselves. First up is the 'Treasure Box', an opulent-feeling cocoon for twelve of the museum's finest classical Cremonese instruments. Here are a handful of Strads, including the 1669 'Clisbee' and 1715 'Cremonese' violins; the c.1566 'Charles IX' Andrea Amati; the 1734 'Stauffer' Guarneri 'del Gesù'; and instruments by Giuseppe Guarneri 'filius Andreae' and Francesco Rugeri, among others. After the bright, airy spaces of the other galleries, this room, with its rich red floors and walls, low ceiling and curtains at either end, comes as quite a shock. The enclosed, hushed ambience and the lack of natural light take a while to get used to, and the illumination of the instruments is not as neutral as in the other galleries – a small flashlight is desirable.??

Beyond the 'Treasure Box' is a room containing moulds, templates and tools from Stradivari's workshop.  Recently transplanted from the Museo Stradivariano, these are now ensconced in impressively heavy, glass-topped drawers. Then it's back to violins, with a room dedicated to Cremonese instruments from the late 1700s to the early 1900s, and another that's comparatively jam-packed with winning instruments from the Triennale violin making competition. Multiple-instrument cases here enable immediate comparisons, although the two basses present are both by the same maker, Cremona-based luthier Marco Nolli.

??Rare instruments from the Friends of Stradivari network of collectors have their own central space where they are on temporary display. But again, like the 'Treasure Box', the ambient lighting could be better, as the area has a dark carpeted floor and is semi-enclosed by two walls and a low ceiling. At least there is ample space to appreciate the decorative details of such violins as the 'Sunrise' and 'Hellier' Stradivaris.??

Anyone concerned at the thought of so many fine violins encased behind glass and not given voice should be heartened by the museum's other great asset – its 460-seat, in-the-round auditorium. Not only is this a beautiful hall, both aesthetically – all organic curves and plush veneers – and in its pristine acoustics, but it also offers regular opportunities to hear instruments from the museum's collection being played. On the afternoon I visited the museum, the 1727 'Vesuvius' Stradivari violin, the 1615 'Stauffer' Amati viola and the 1700 'Stauffer', 'Cristiani' Stradivari cello must have only just been returned to their cases in the 'Treasure Box' room, having been played by the Amati String Trio in their morning concert.

Hearing the instruments like this, then inspecting them up close, is an experience that few museums can offer. And for all the fun interactive technology of the introductory galleries, it's gratifying that the biggest investment has clearly been made in the state-of-the-art concert hall.

For more photos of the museum galleries, see here.