A potted history of Dragonetti – the ‘Paganini of the double bass'

He was Europe's first – and the world's finest – virtuoso double bassist, who was admired by Beethoven and granted favour by Napoleon. But the story of Domenico Dragonetti is shrouded in intrigue: who was the man they called ‘Il Drago'? 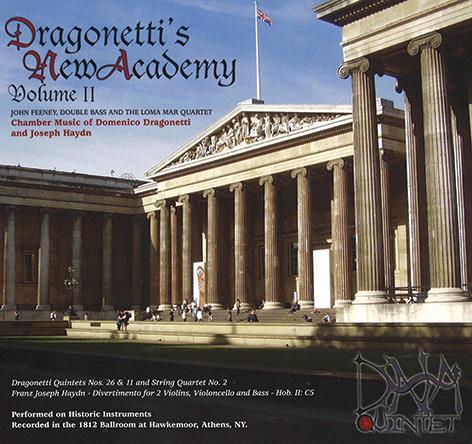 1763: Born in Venice, the son of a poor barber who plays the kettle drums. As a child he receives violin instruction from a local shoemaker, who persuades him to take up the bass.‘As a child he began to teach himself the guitar and the violin, and it was soon recognised that he had exceptional talent. He exchanged the former instruments for the double bass, on which he had instruction from Michele Berini, double bass player in the Ducal Chapel of San Marco.’

‘An honour than which Venice can offer no higher to the musician. And all these things happened while the lad was yet in his teens and before he had attained anything like the full measure of artistic development.’

1780s: At the Benedictine Monastery of San Pietro at Vicenza he discovers the famous Gasparo da Salò bass he would play for the rest of his life.

‘He tested the power of this bass when staying at the monastery of St. Giustina at Padua, when he imitated the rolling of thunder, bringing the monks out of their cells in the middle of the night.’

1794: He moves to London where he plays at the opera and the concerts at the King’s Theatre.

‘From this time to the date of his death in 1846 no great concert or musical festival was considered complete without a performance by Dragonetti.’

c.1794: He meets the Italian violinist Viotti, who invites him to perform some violin duets with him.

‘Imagine his surprise when Dragonetti turned up for rehearsal with his monster friend the famous Gasparo da Salò bass. “But you surely won’t play a fiddle part on that thing!† exclaimed Viotti. But Dragonetti did, and after the first rehearsal Viotti was in ecstasy over his partner’s prowess.’

c.1809: At the palace of Prince Staremberg in Vienna he plays before Napoleon.

‘...which so delighted him [Napoleon] that he offered to grant him a favour. Dragonetti spoke a mixture of Italian dialect, English and French, which proved incomprehensible to the Emperor, who grew impatient and told him to express what he wanted on the bass, and he felt sure that he could understand him.’

1831: Paganini performs with the King’s Theatre, and acknowledging Dragonetti’s virtuosity challenges him to play the second part of a violin duet with him, on the double bass.

‘“Certainly,† said Dragonetti, “in fact you may write one specially of any difficulty you choose, and I should be most pleased to play it with you† – and he did.’

1845: He travels to Bonn to play as principal bass at the Beethoven Festival.

‘His extraordinary fine and powerful tone and wonderful technic, combined with fine musical feeling and judgment, made him indispensable to the orchestra. Berlioz remarked that he never heard the Scherzo played with such vigour and perfection. Dragonetti was then 82 years old.’

1846–46: During his long career Dragonetti met Haydn, Beethoven and many other great composers. Shortly before his death he is visited by Strumpff, a harp maker.

‘As Dragonetti held out his great hand covered with callosities unnaturally spread from constant playing, Strumpff said with emotion: “This is the hand which Beethoven, our great friend whose spirit now dwells in purer regions, bade me press.†’

1846: Dragonetti dies at his home in Leicester Square, London. An obituary written in April 1846 reads:

‘Dragonetti was the greatest performer of his age on the double bass – possessing the finest instinct of true excellence in all that concerns his art.’

For more articles on the world's great string players,  subscribe to The Strad or download our digital edition as part of a 30-day free trial. To purchase back issues click here.